Just in time for Season 5, we have a nice look at DST's hopefully first of many waves of figures from the Cobra Kai show. DST has the license to produce figures only from the Netflix show, however they noted to us that they can make figures from flashbacks, so time will tell if we get classic characters from the films as well. In keeping with the selects line, we got the same articulation, accessories, and detail that we come to expect. Check out the breakdown on the figures below. 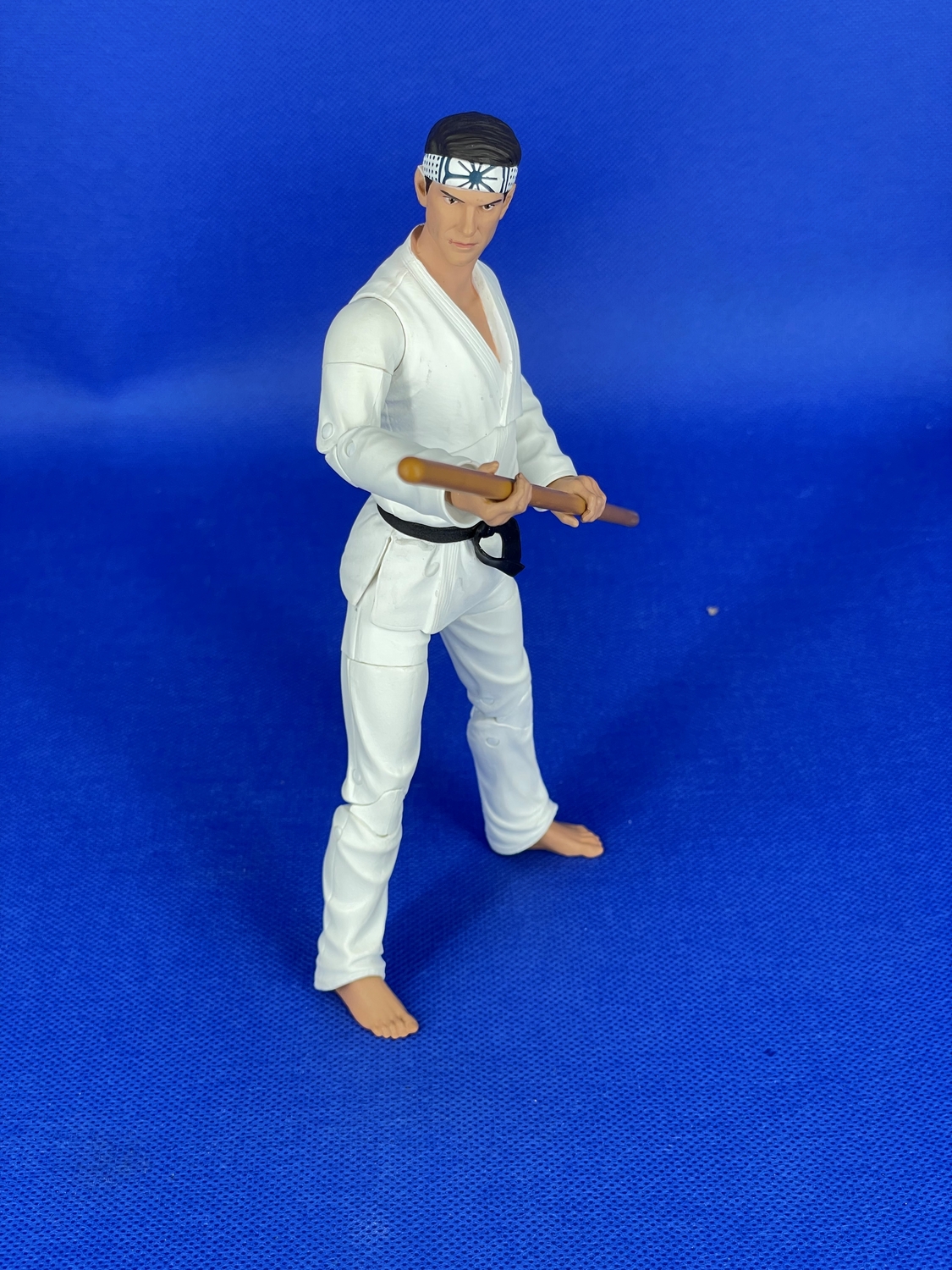 The karate kid himself! He has a few more miles on him but has not lost his touch. Now a father training the next generation of Miyagi Do students, Daniel is taking on the mentor role. He's featured in his signature gi and sporting some classic Daniel accessories. He comes with a bo as seen in the demonstration episode at the carnival, a bonsai tree, the hand drum, and some alternate hands to enable him to better holder the accessories. We had trouble getting the drum hand into the socket, it was just a little bigger on the peg end but that might be just our sample. He was able to use both hands to hold the drum and bo efficiently. We got a great range of motion out of his joint for a variety of poses. To top it off the figure includes a stand to permit a range of additional poses, including the legendary crane kick. 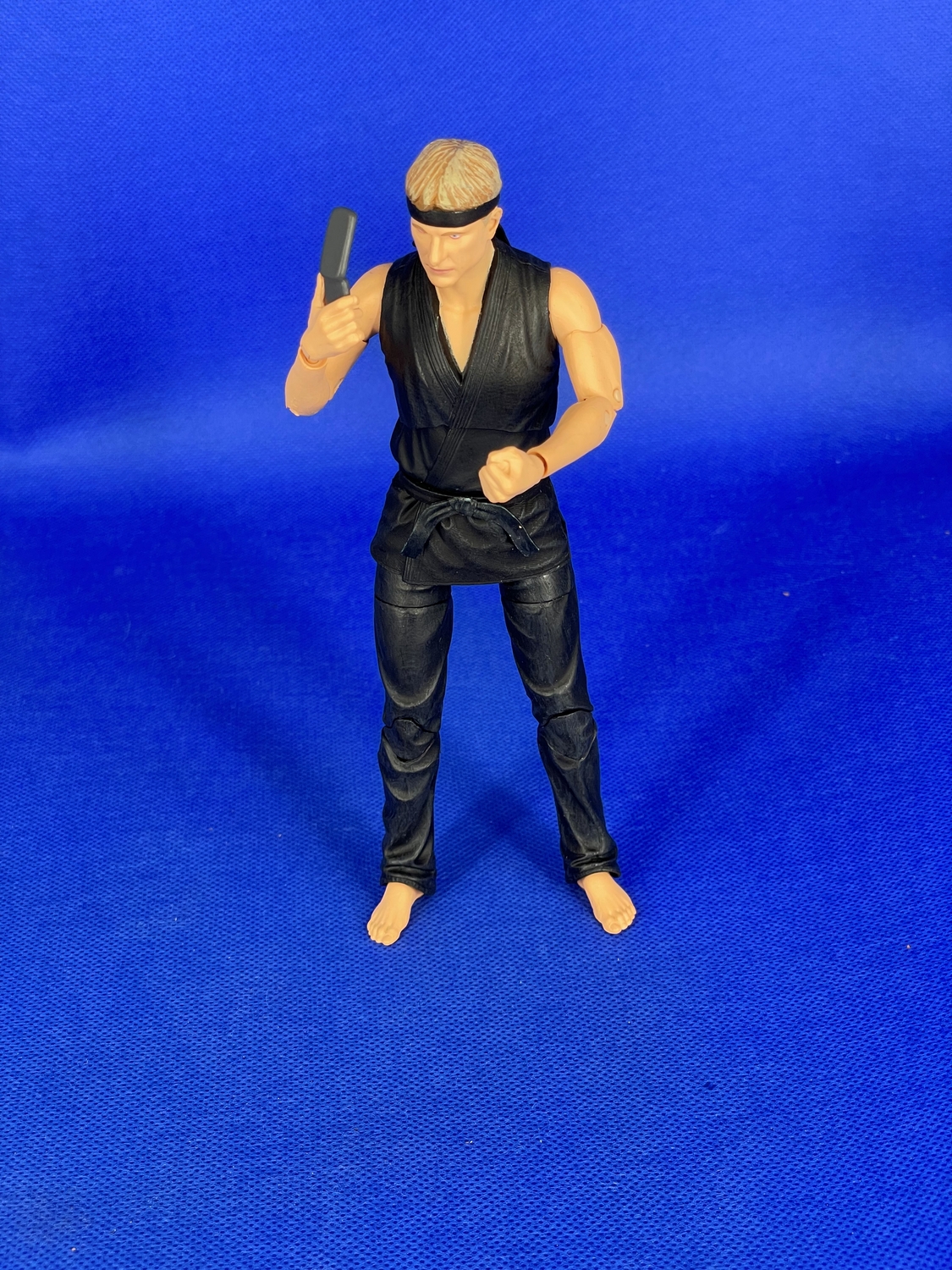 The original bad guy but cast in a sympathetic light in the series, Johnny finds himself at a personal crossroads between his desire to display his sense of awesomeness and a responsibility to do right bu his students. Johnny reignites his old rivalry with Daniel, sporting a look from the earlier seasons. Johnny was our favorite in this set, simply because of his accessories. The pointing hand and the cell phone really take this figure over the top, eliciting memories of Johnny's struggles with modern technology in the show. The figure just has a nice overall vibe to it despite the simplicity of its design and detailing. 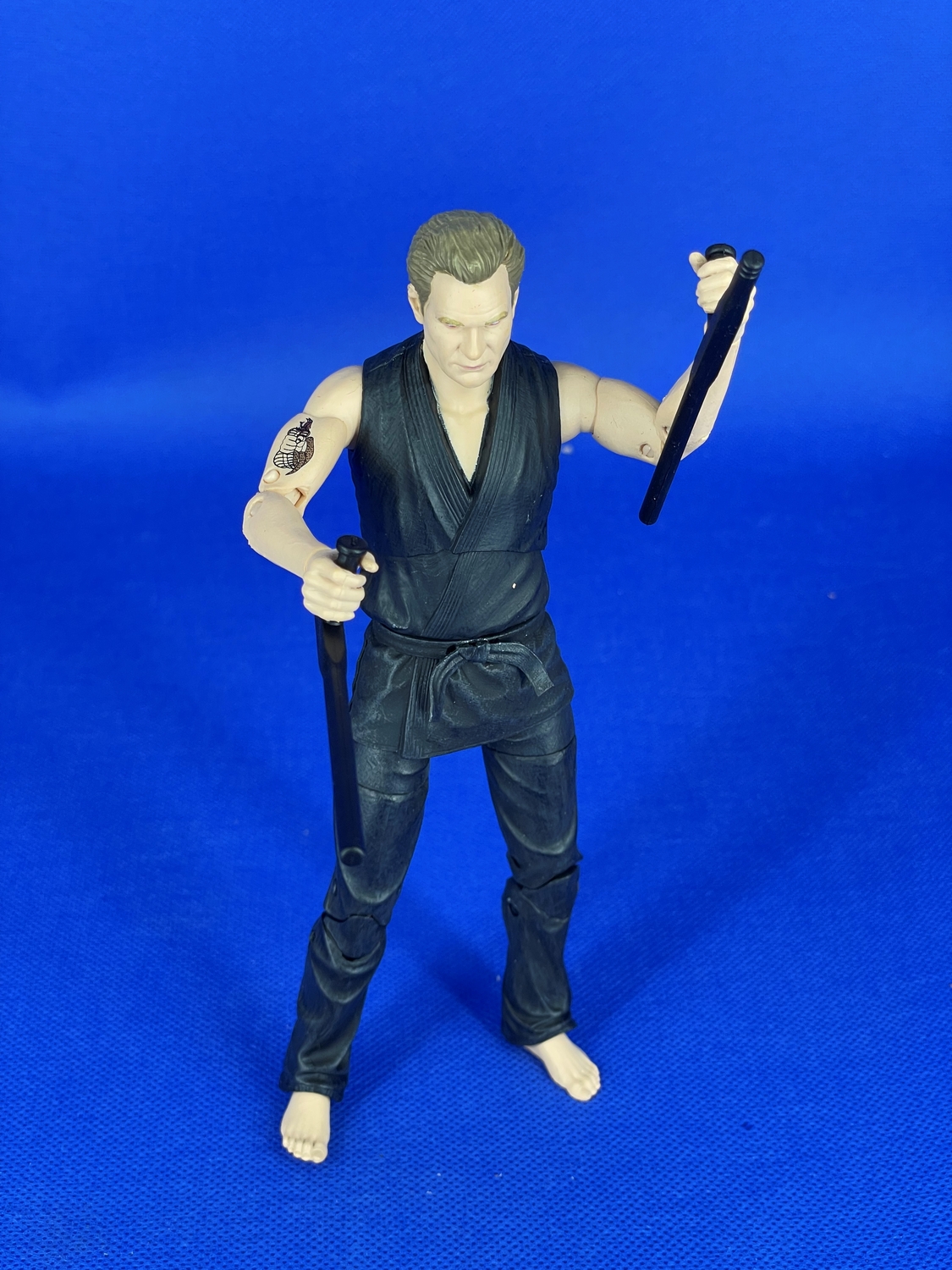 The big bad of the original and an enduring influence in Johnny's life, Kreese makes his return, coming back from the dead yet again. Kreese has some nice details to showcase his toughness, including his tattoos and signature sleeveless gi. Kreese also include an assortment of weapons including the tonfa, sai, a bo, and additional hands. He also comes with a stand featuring that signature Cobra Kai logo. We found we could the proper manipulation and orientation of the weapons in his hands. One criticism is due to the way the figure was packaged, pressure from the plastic bubble bent the sai, giving them a curved look out of the package. I'm sure they will go back to shape over time, especially with a little proving, but this could have been avoided if they were not packaged in his hands but rather on the side. All together, Kreese makes a nice addition and provides additional accessories for your other Cobra Kai figures. 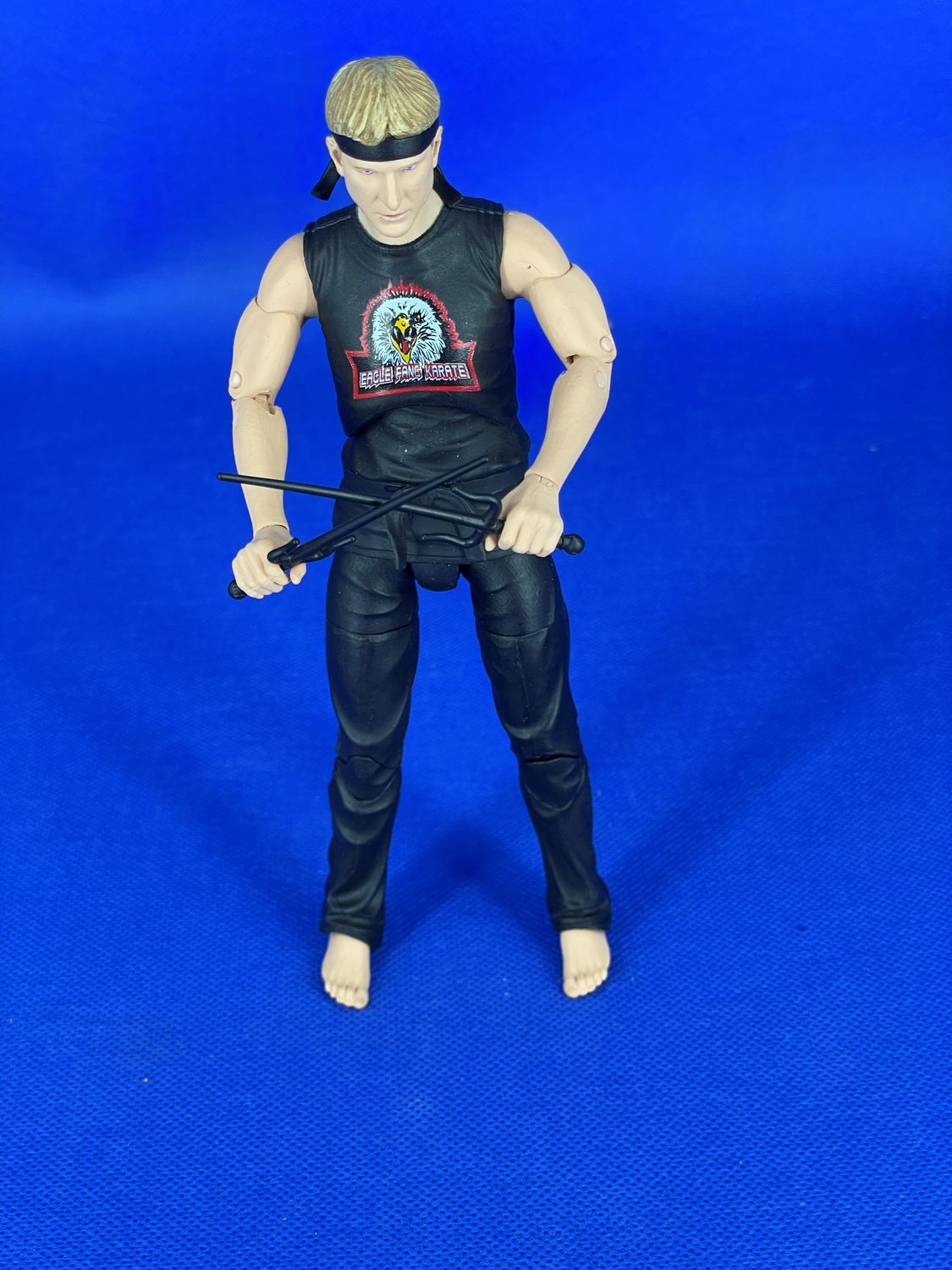 What a great addition to the line. How can you do a Cobra Kai line without Eagle Fang? So glad DST did a alt Johnny in his new uniform. This version features the same head but with a newly sculpted torso and cod piece. He features the sai and tonfa similar to the Kreese figure. However, the figure is packed with the sai at his sides, rather than in front of him, so we had no bends in our Eagle Fang Johnny sample. Eagle Fang Johnny also include a stand with an Eagle Fang logo base, great seeing that logo! 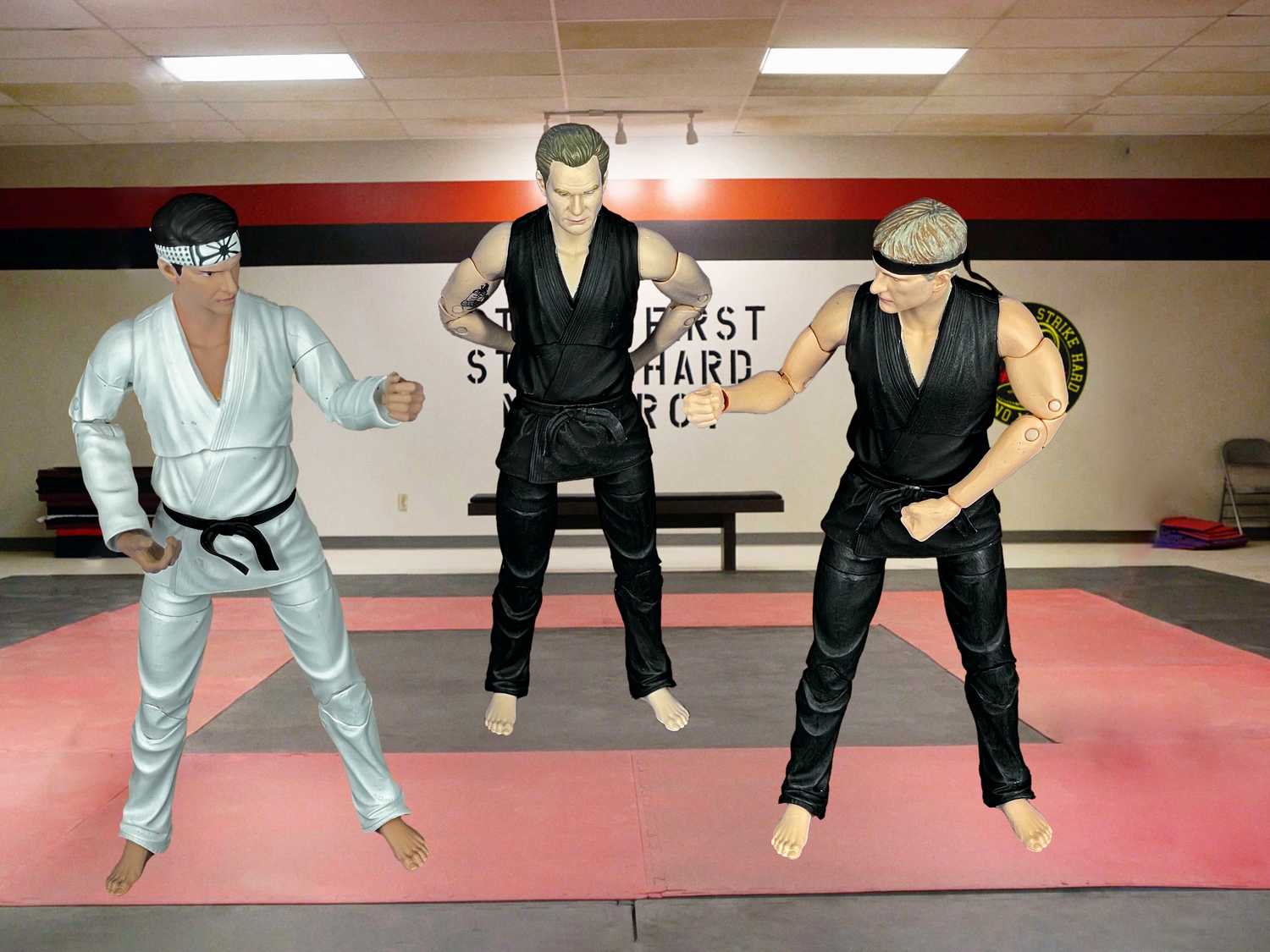 We hope you enjoyed this final written review as we transition to our video content from us and through our new partnership (more on that really soon). These figures are great for fans of the show and certainly allow you to celebrate the new season and set up your own karate rivalries at home. They also make for a great conversation piece on your desk at work. We have some links above for you to acquire yours and start your training now!