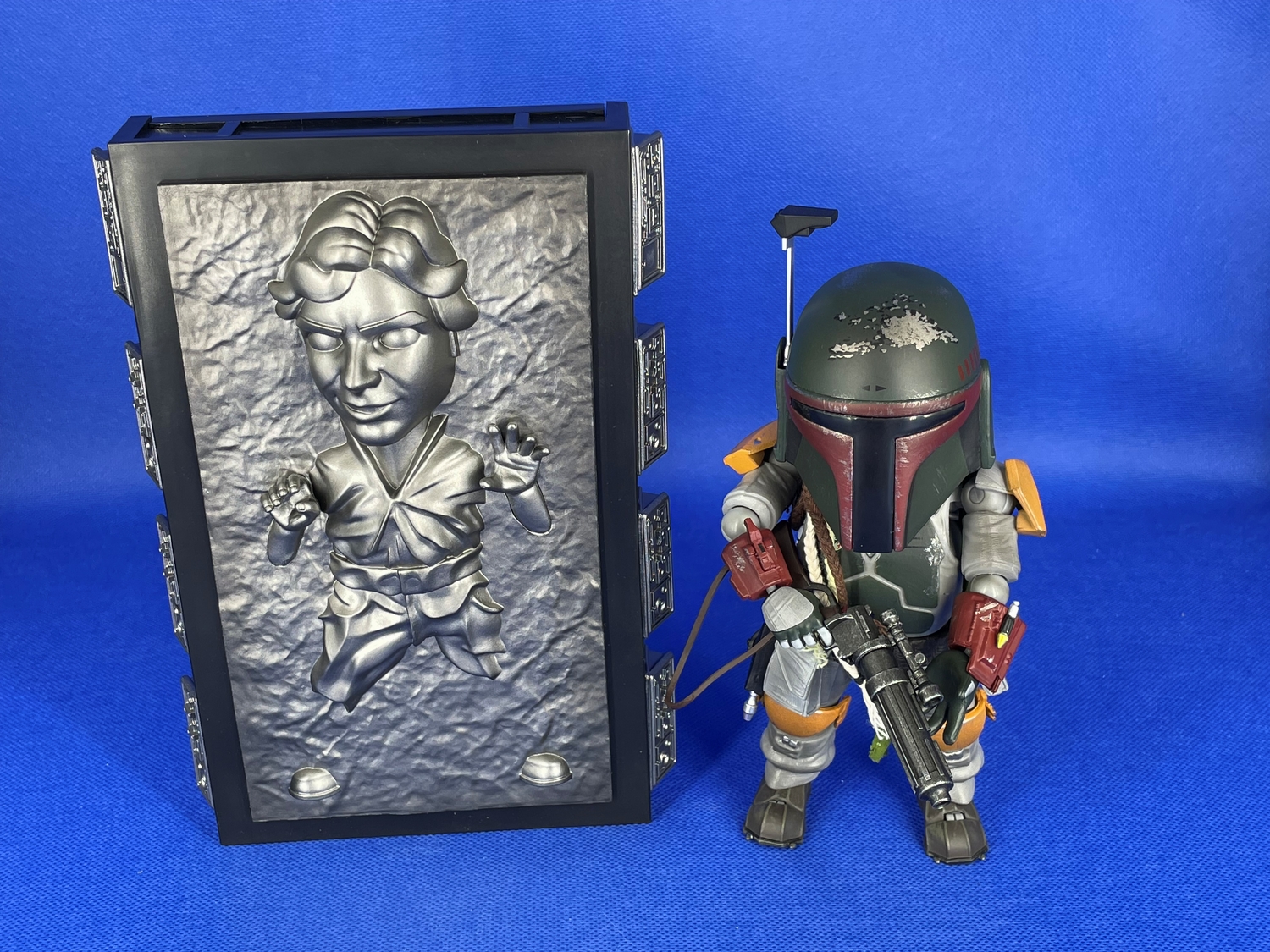 Boba Fett was the first figure after the hiatus taken following the Rogue One additions to the Beast Kingdom line, and he was in high demand. After selling out, Boba commanded quite a premium in the secondary market. That version was the ESB Fett and fortunately the next release is the ROTJ version, allowing collector's to expand their Fett love. This time around Fett is also a deluxe and includes a Han carbonite figure. While Han doesn't really do much, it is a nice touch and definitely increases the display value. 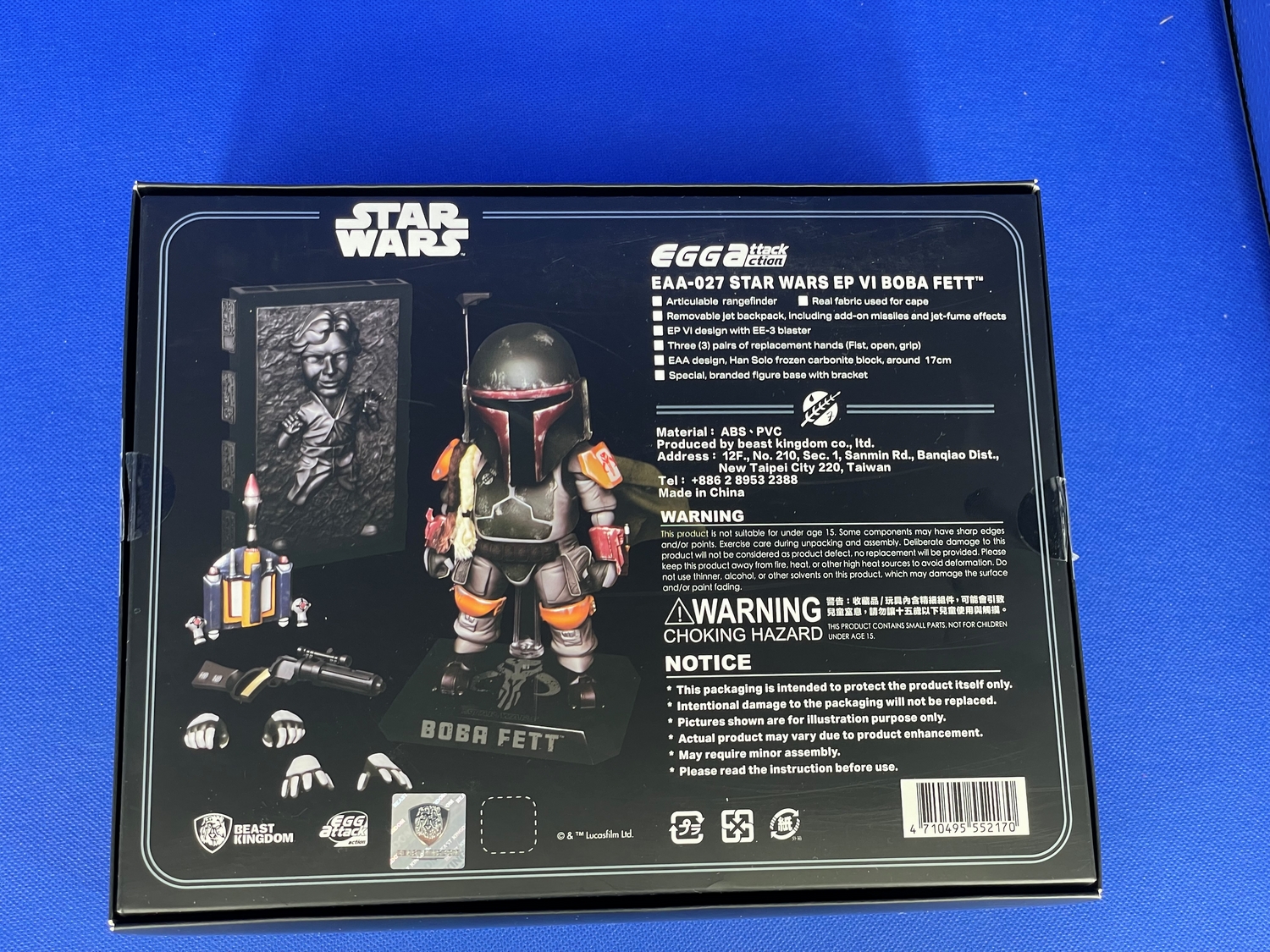 Feet comes with everything you'd expect him to plus a few surprises. You get two sets of extra hands, his EE-3 carbine rifle, his pistol, his jet pack, and a missile firing effect. These were the easiest hands we have ever switched out on a Beast Kingdom figure, ever! They are firm and snap on and off without any difficulty. Even the gauntlets didn't get in the way. Han comes with his carbonite block, and that's it. Honestly, what did you expect him to come with? There is no Han figure inside, it's a simple block, but it stands freely. Also included is a Boba Fett figure stand with a nice Mythosaur emblem on it. 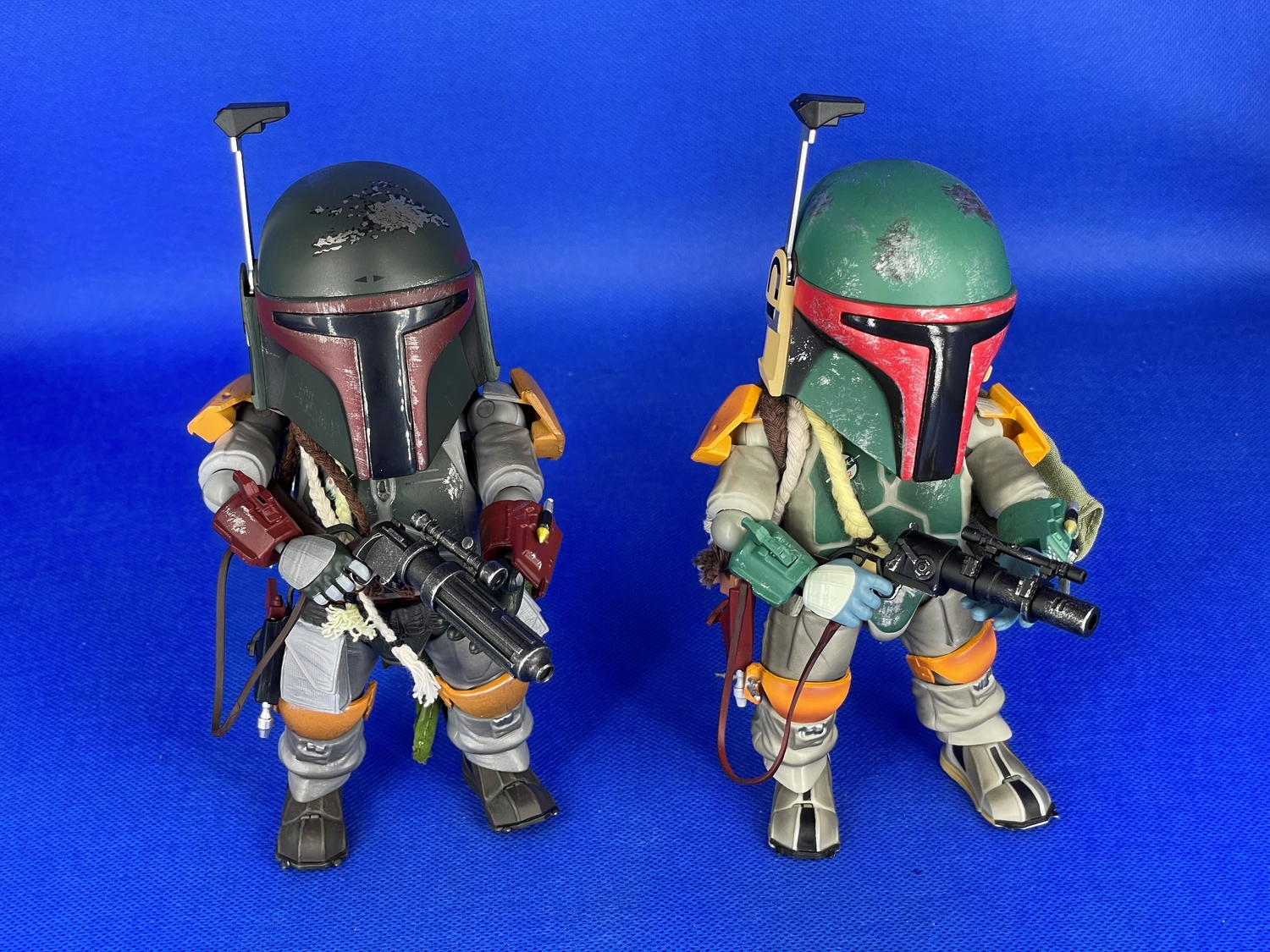 Beast Kingdom got it right. I mean that says it all. Look at this guy compared to the ESB Fett, he has the right coloring for ROTJ, the right blaster, the right belt, the right jetpack, the cape, etc. Other companies should take note. They definitely paid attention to the details here and it shows. Major improvement on the wookie braids from the ESB version, much trimmer and accurate to scale this time. Special mention to the weathering on the helmet, armor, and jetpack and the tattering of the cape. He has a real worn-in look and it makes this figure really pop. 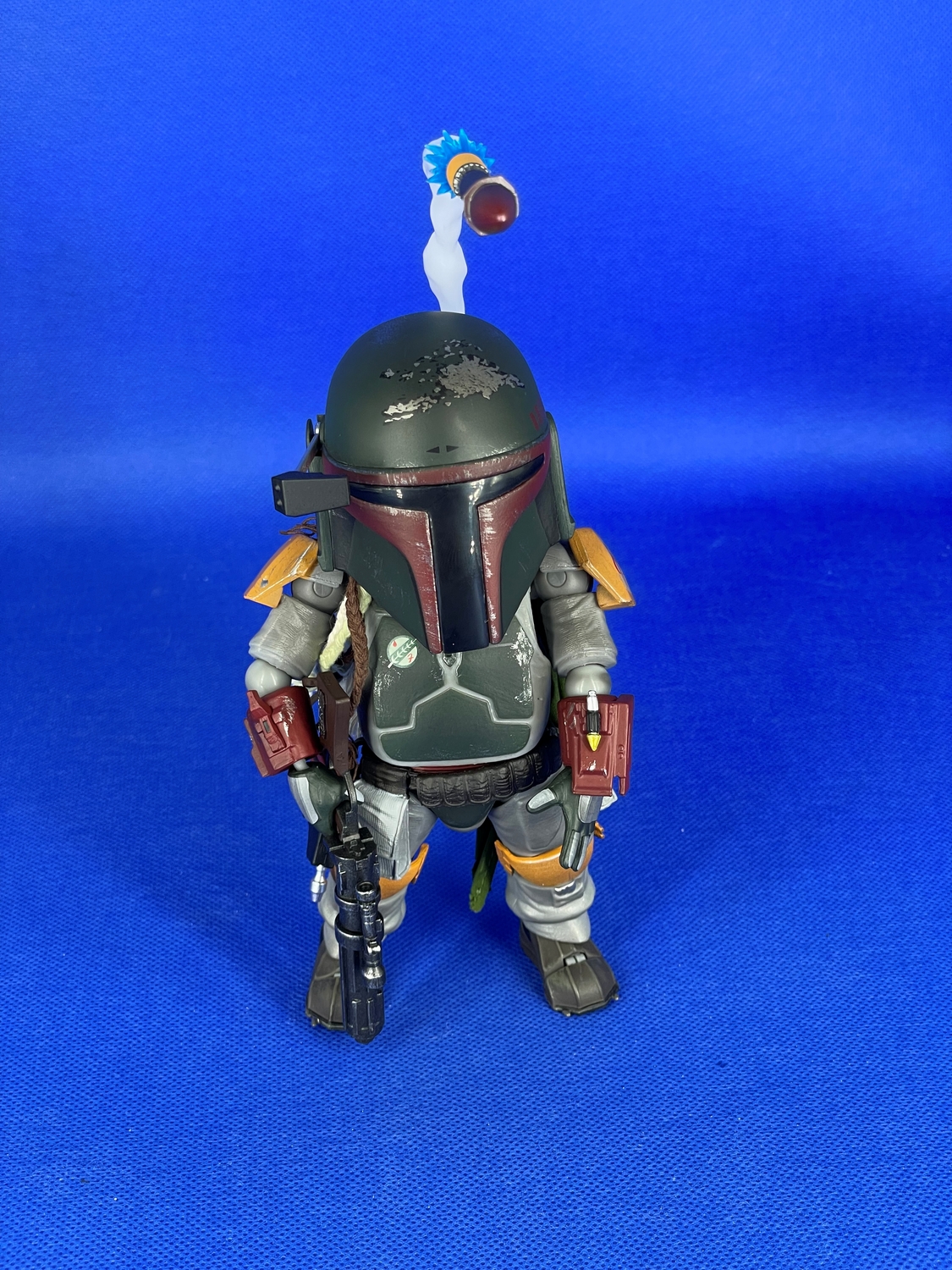 The stand out here, the pop out joints in the shoulder allowing for the arms to wrap around the torso more. This way you can grip the blaster better and reach across the body allowing you to pose with the gauntlets and hold the rifle in more positions. A really nice touch that all figures should really include. Now as we have pointed out in other reviews, Beast Kingdom figures always have some kind of a surprise, well of course there is one here. First it's not a magnetic jetpack. It just pops into a hole in the back, which was a little bit of a let down but understandable. Fett does not take it on and off in the movie so a more permanent on mode makes sense. This time the feature is a fired rocket with an exhaust stream that captures a mid-air action sequence. A fun and unexpected feature that pairs well with the functional range finder. Of note, Han has one pose, vertical, and he nails it. Note meant to be the floating ESB version since he is just displayed on Jabba's wall in ROTJ but he does stand upright without a stand. 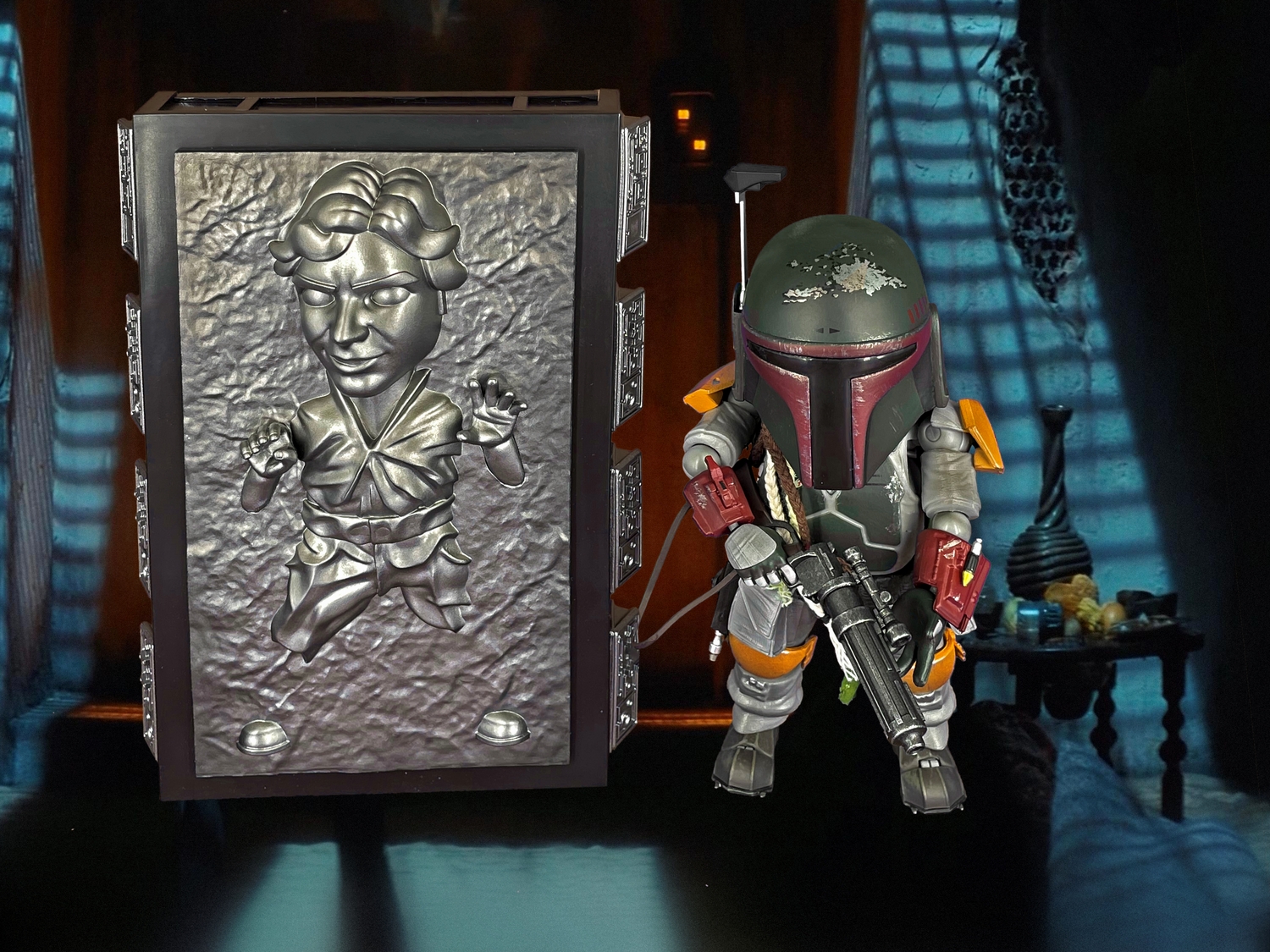 Significant detail enhancements over the ESB version, improved posing, and a great special feature, the ROTJ Boba Fett is not only the best Boba Fett of the Star Wars line, it may be the best figure produced so far. With the addition of the Han carbonite figure providing a nice set piece or backdrop, fans are sure to clamor over this figure and we can see it disappearing relatively quickly and commanding another high price on the secondary market. Beast Kingdom really shinned here and deserves recognition for their attention to detail in capturing the differences between the two costumes. If you are a Boba Fett fan or a Beast Kingdom collector, make sure to order this while you still can. You can score one from Entertainment Earth with free shipping now!