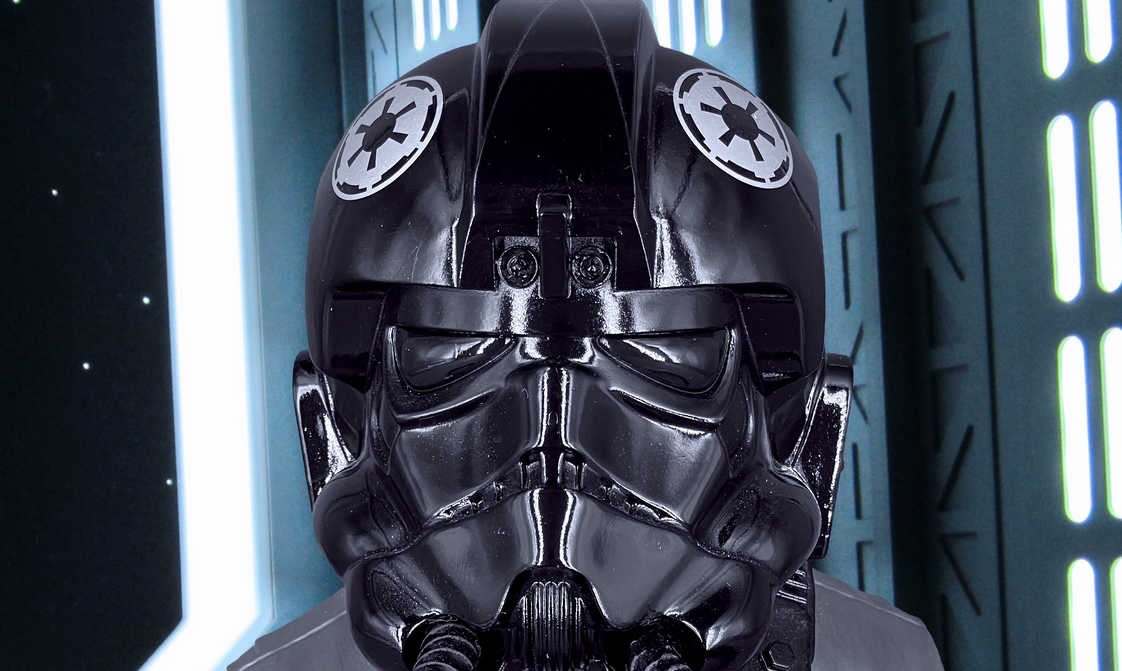 Thanks to our friends at Diamond Select Toys, we got a chance to review another of their amazing Legends in 3-Dimensions line from Gentle Giant. This time the lethal and efficient TIE Fighter Pilot!

For those of you not familiar with the Legends in 3D series produced by Gentle Giant Ltd, they are half scale renderings of iconic characters from movies, video games, comics, and cartoons. These are super detailed and composed of solid resin, not hollow. You can order your TIE Fighter Pilot from Entertainment Earth by clicking here and head over to GentleGiantLtd.com to see more of the line including the upcoming classic and modern Boba Fett Legends in 3-D busts. 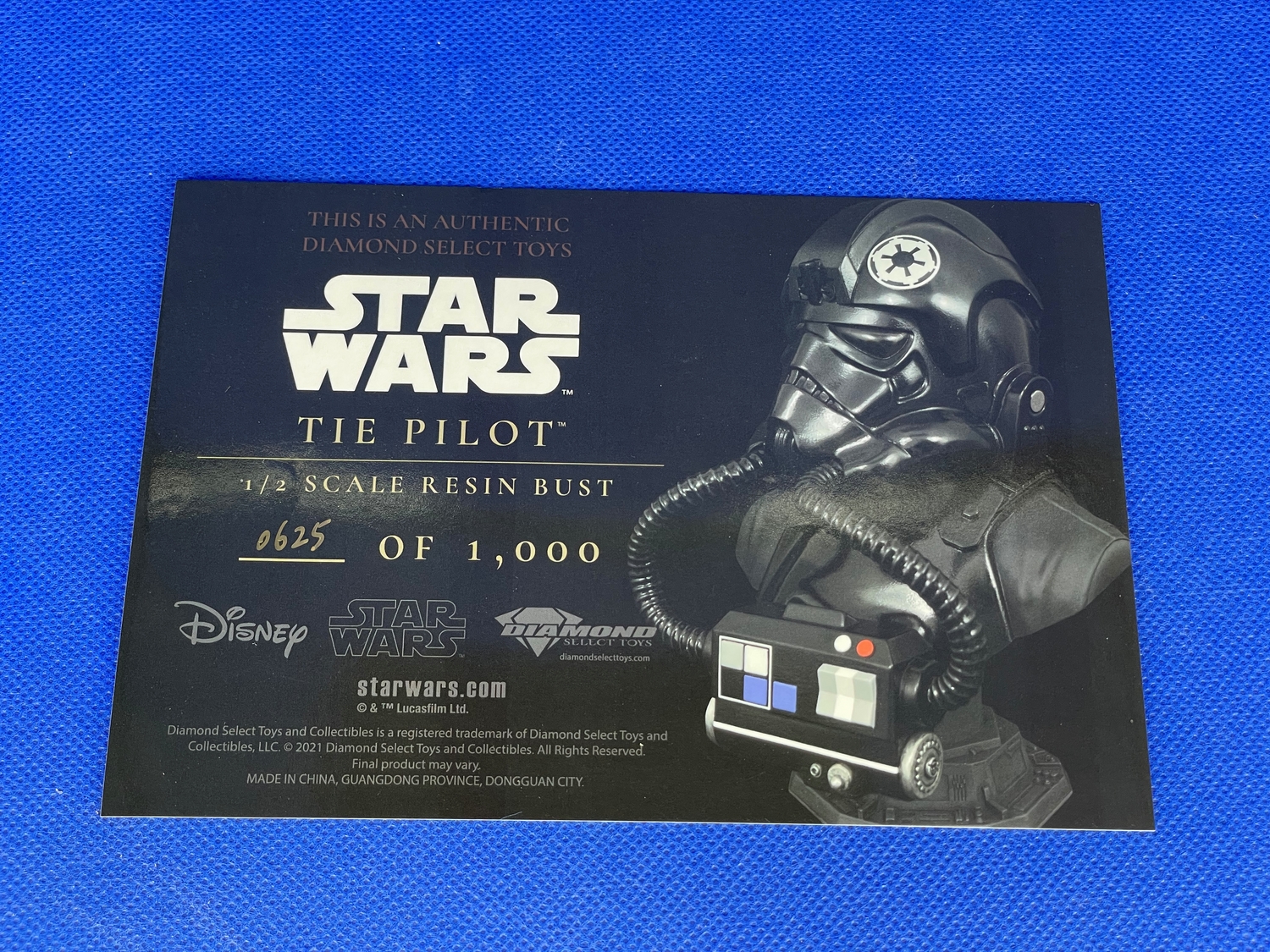 True to all products we see from Gentle Giant and Diamond Select, the items are packed well in a custom fit styrofoam. The box uses the same design as the other Legends in 3-D pieces we have seen. That's fine because you are not meant to display this in the box. As with any bust from Gentle Giant, it includes a certificate of authenticity with the product number from the series. 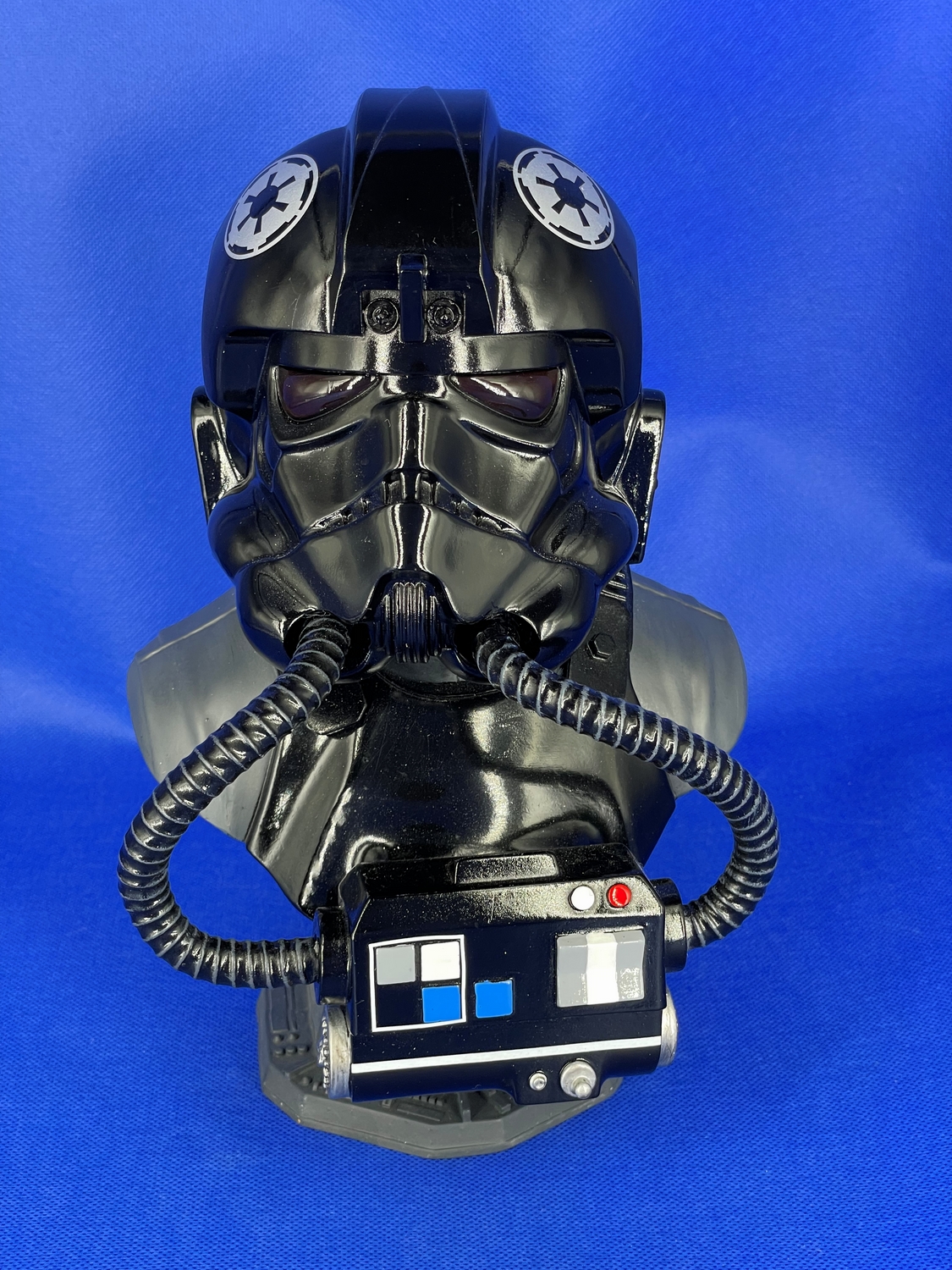 The bust is gorgeous, portraying the TIE pilot in a statuesque pose, giving off the aura of discipline and lethality. There is a great amount of details in the helmet, pipes, and life support system. The TIE pilot was always an ominous looking character on screen and the bust definitely captures that presence. Dark and menacing, you never knew what was going on behind that helmet, you just assumed the person behind the mask was cold and calculating as you imagine an imperial pilot acts. Through the films and other media we have seen a lot of variation in their design, mostly minor paint applications to their helmet and some variations to the uniforms, otherwise they have mostly been in their iconic flight suits and tubular helmets, which Gentle Giant captured here by way of the A New Hope version of the TIE pilot. 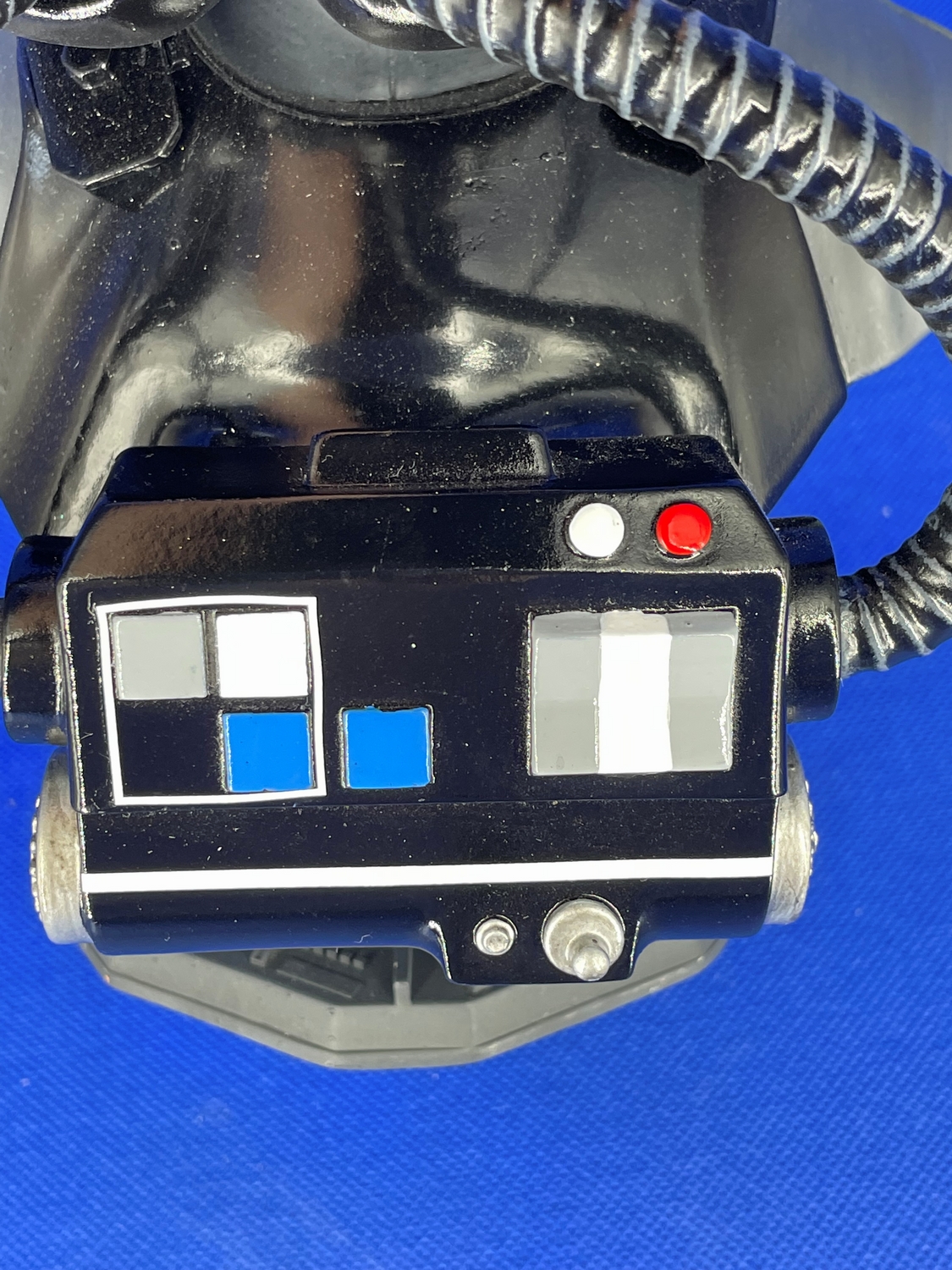 There was a lot of care take in the markings and color schemes here and they are screen accurate for the most part (more on contrasts below). There is a nice two-tone color scheme on the life support tubes, it really helps them pop and lets you see all the segments of the tubes. The Imperial palette is pretty drab and captured here, the Empire likes its blues and grays with an occasional splash of red, simple enough on the costumes and is captured here quite well. Anyone who has seen a cosplayer at comic con will immediately recognize the paneling. 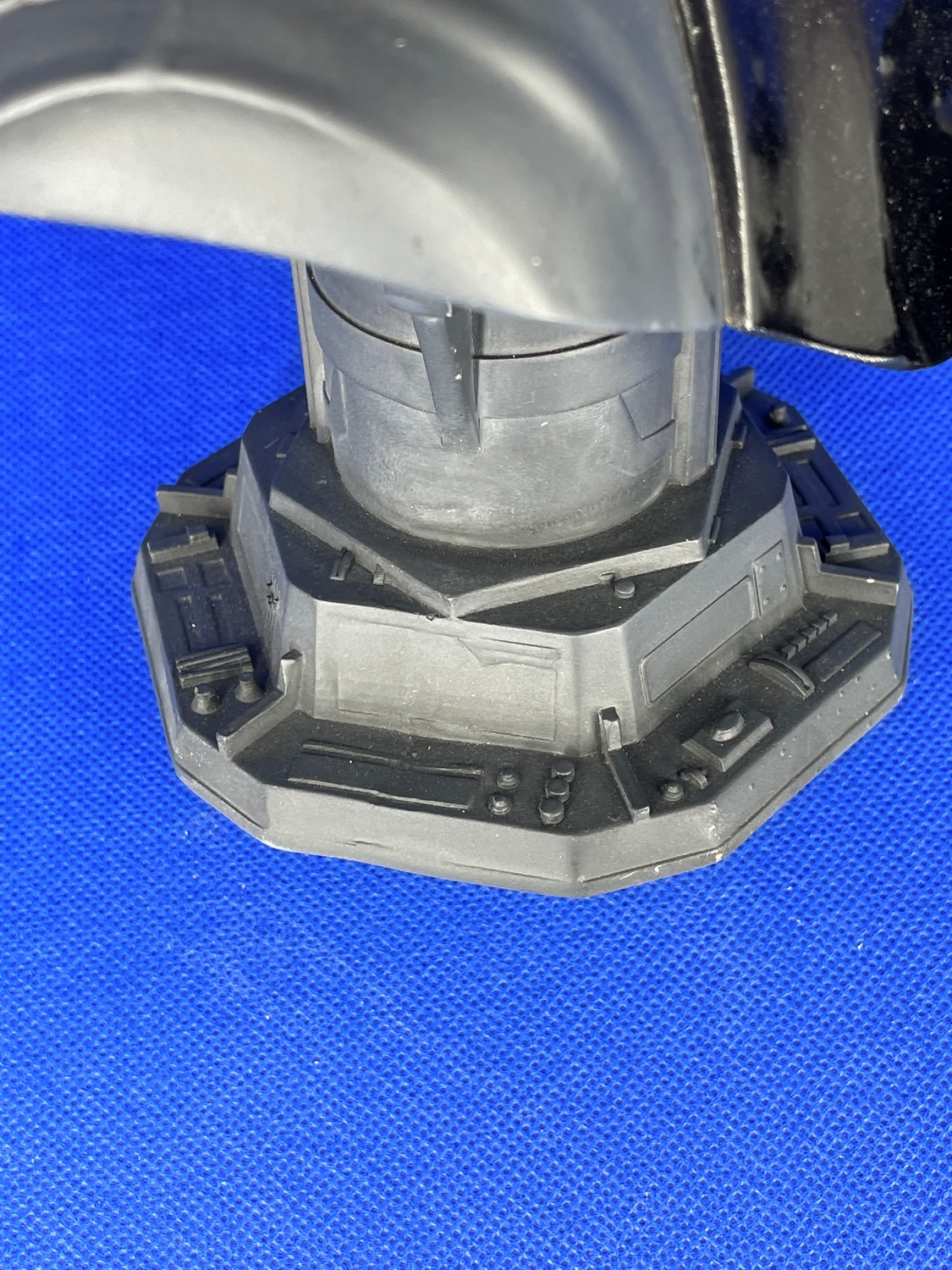 The base on these pieces as important as the piece itself. They strive to take an element of the film and something that is unique to this character or can easily be associated with it. In this case there is some structuring similar to the surface of the Death Star or a Star Destroyer. Fun fact, in Return of the Jedi, the panel from the Super Star Destroyer from the close of shots of the A-Wing's final flight was recycled to act as the Death Star II surface for the shots of Lando's assault. So essentially, the surfaces are the same and this works well for this bust. 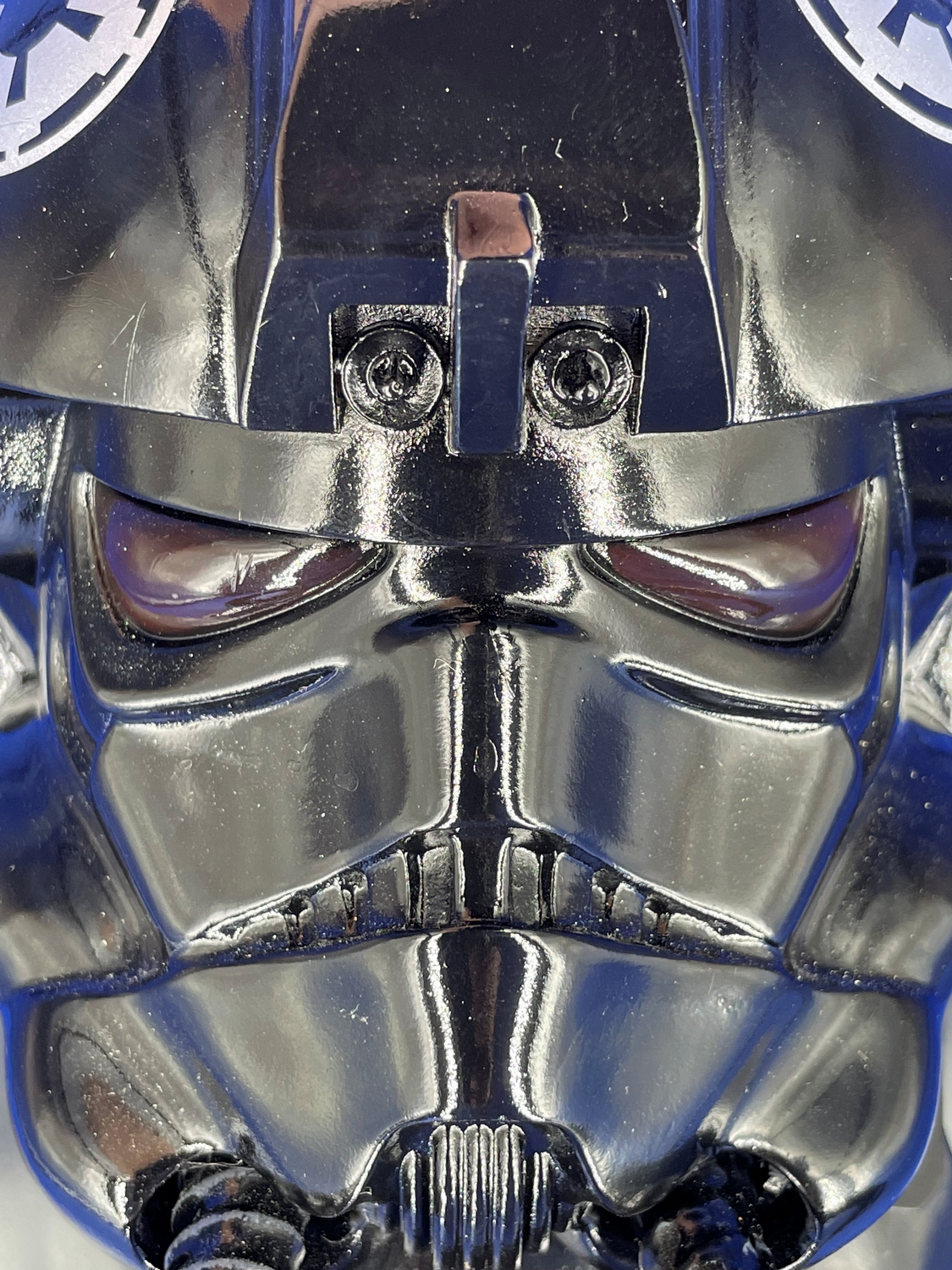 Now as we said before "for the most part" because we noticed some incorrect paint applications for the canon TIE pilot. First the gray flight suit (as seen in the first image). We could not find any depiction of the TIE pilot in an on screen look in canon. The flight suit should be all black. Unclear if this was artistically done to help with the contrast between the vest and the flight suit but it is a noticeable deviation from the classic trilogy TIE pilot. It may just be a really light black to help accent the vest but it came off looking pretty gray to us. Second, the red lenses. The lenses should be gray or black. In this instance they are red. Now this could have been an artistic choice to give the appearance that the TIE pilot is in his cockpit with the instruments reflecting the ominous red hue on the lenses. You will see that in some of the screen shots, but only Vader had red lenses in A New Hope, not the TIE pilots. A good resource to check these things out yourself is the 501st webpage. They have costuming instructions for screen accurate details based on dozens of images and hours of research. 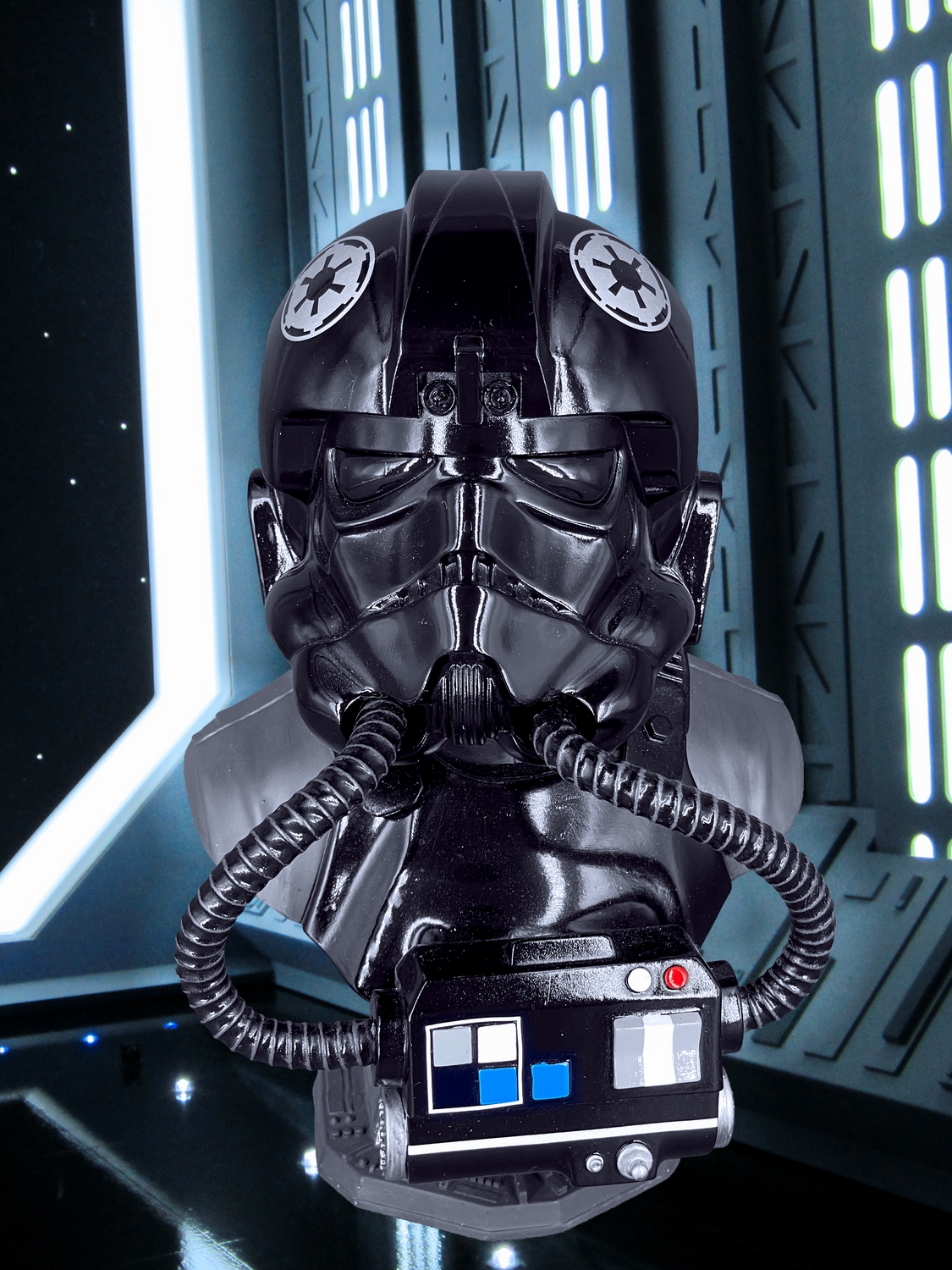 Despite the aforementioned deviations from canonical details in a couple of instances, this is a great piece of a great character. It's a fun display piece and while the Stormtrooper is the most iconic solider of the Galactic Empire, the pilots have always been the most menacing looking, and the TIE Fighter Pilots all clad in black are the scariest. Our second in this line, we continue to enjoy them. They may be half scale but they don't skimp on quality or detail. We find the half scale more enjoyable, as you can fit more on your display shelf, and after you get one you are going to want more. Again if you want to order one, you can head over to Entertainment Earth to grab yours with free shipping.