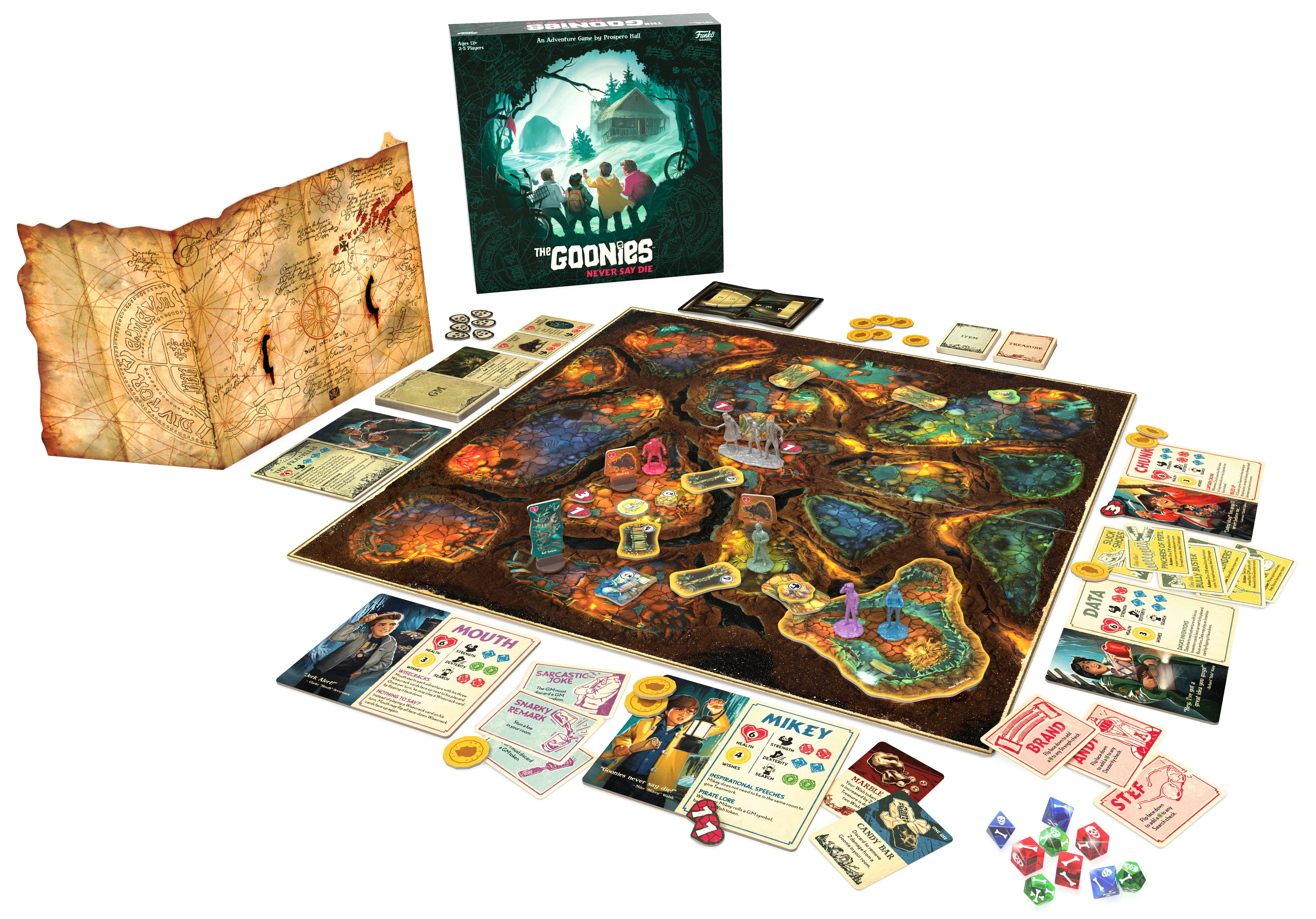 Hey you guys! Grab your copper bones and get ready for adventure as we walk you through the amazing experience of Goonies: Never Say Die from Funko Games and Prospero Hall. Truffle shuffle not required to enter! Prospero Hall and Funko Games continue to deliver on providing the atmosphere and immersion one would get from an experience tied to a beloved franchise. Elements of the game are designed to capture not only the spirit of the film but the traits of the characters. Data has his inventions, Mouth has his mouthiness, and so forth adding a dimension to the chapters beyond the tokens.

The game board captures the locations from the film and beyond and opportunities are not missed to add additional atmosphere. For example, the Goondocks Master's partition (more on that later) resembles the map from the movie. All the tokens have a feel of an item or symbol from the movie, and there is even an octopus that fans will recognize from the deleted scenes. So many pieces! First, we will say how much we appreciate the inclusion of extra bags to store the tokens. In past games, we had to get a bunch of zip lock bags to put our punched out pieces into for safe keeping in future play. Funko Games was curious enough to include several empty bags for players to store all these punch out parts.

There is so much here both for mechanics and atmospheres. You'll find several player and enemy tokens, including additional goons. Dice for all your action, a variety of sided dice and colors. Several cards for treasures, items, player specific skills, special items, Goondocks Master cards, etc. And finally environmental tokens including boulders, bridges, searchable locations, chambers, and many more. These parts all help define the different stages and create obstacles or opportunities for players. The clever design helps create a lot of space on a little board and if desired offers near infinite customization for players making their own games. The game is designed for an easy and rapid setup between games, of which there are nine structured rounds and many more if you want to customize. The game setup is restricted to the player designated as the Goondocks Master (GM) a clever word play on the game master. Basically think Dungeon Master from Dungeons and Dragons, as the game plays very similar too. The GM sets up the board, knows where the obstacles, enemies, and passages will be and the board unfolds as players move about. While the starting location is set, the immediate proceeding set of rooms is only marked with an unknown token, as the GM sets up rooms as players advance. So basically as a player, you don't know what is around the next corner until you go there. We found this creates and element of surprise and danger, really playing to the adventure aspect of the game. It also provides an instructive set up that only one player needs to manage, simplifying the design and maximize the time spent vice time setting up.

Chapter-based setup involves taking some starting tokens and whatever character specific special items exist. For example Mouth and Data have additional ability cards you can use during their turns to provide an extra edge. As opposed to other games we reviewed from Funko Games, this game actually has people working toward two different objectives. The Goonies characters work as a team to complete the objectives and the GM basically works alone to stop all the other players from succeeding by either running the game clock out with their own abilities or through defeating the players in battle a certain number of times. Goonies never say die, but death has its consequences after all. The GM controls the enemy tokens and can move them around the board and attack the other characters. Additionally, the GM has their own set of player cards with abilities to create obstacles or more enemies to challenge the Goonies characters. There is a cost to doing this and the GM gets tokens either earned at the beginning of each round or when players roll a GM symbol during their own actions. The GM must decide to use these tokens to draw or activate additional cards (only one freebie play per round) or upgrade dice. Dice work on a tiered three-level system attributed to their colors and sides. Tokens can give you the next tier which gives you a higher chance of success. The GM wins by running out an hourglass. There are 4 levels to the hour glass and each one is achieved either through the defeat of a Goonie character or playing a special card that allows you to roll for the opportunity to move another level of sand either through special conditions or paying tokens. There is a little more dimension to GM actions as there are reactionary plays, where cards can be used during player turns in reaction to their moves adding additional peril and uncertainty to gameplay. The Goonie players, as stated, simply have to reach the end objective. But it is not so simple as you often don't know what that is and won't find out until certain conditions based on player actions are met permitting the GM to reveal what players need to do only at that point. Player rounds consist of two action then the use of any special cards. Actions can consist of movement, attack, search, or adventure specific moves. Each movement counts as one action and movement can be impeded by obstacles, restricting where you go, and as you cannot see the next unexplored room ahead of you, you may find yourself stuck. Attacking consists of players rolling the predefined dice to try for success to defeat enemies. Success are indicated by the bones logos on the dice, and some players start with certain dice depending on what their skillets are, but these can always be upgraded. Searching consists of roll to explore caches in those rooms for the chance to get items, treasure, or unlock secret passages. Lastly, adventure specific actions require players to use a turn to activate something or perform an action to advance the story. This may include rolling to remove obstacles such as boulders from passages.

Goonies players can use team work to improve their odds when performing challenges on attacks or searches. Players can use one of their tokens, termed "wish tokens", to grant one of their specific colored dies to the current player to improve their chance of success. There are also three teenager cards that can add an extra die to the roll but are a one use thing that are only refreshed when the hourglass sands advance, which you don't want happening. There are additional gameplay elements that add more peril and depth to the adventure. At points player will have to perform dexterity checks to cross obstacles or risk losing something. This could be when transitioning between rooms, when the GM places a pit in your room, or when a card requires the action. The item cards and treasure cards add one time use and passive abilities that improve your odds or restrict the GM, making them a worthy pursuit to give you some edge in the rounds. Again, with team work, these cards can be shared among players in the same room. Lastly, characters all have their own special abilities that can be reflective of a players style when entering the game. Sloth is stronger and has better attack dice and hit points making him a tank to absorb damage for himself and others. Chunk can upgrade dice for less and can deal attack among multiple foes. Mouth has better dexterity and "wisecrack" cards that allow him to delay the GM. Data has average abilities but six one time use inventions that are devastating against enemies and can be really useful against swarms or pursing baddies. Finally, Mikey has great search capabilities and teamwork options allowing him to support teammates without being in the same room. No hold on, what about the enemies? The game's got the GM covered as there are some awesome boss characters too. The Fratellies have good attack ability, cannot be eliminated, restrict player movement from rooms, and add special cards to the GM deck for the round. The Octopus has good attack power, multiple hit points, and a bunch of cards during its alt side to enhance attacks or diminish players. Lastly, One-Eyed Willy, who also has two forms, is a HP tank, has good attack ability, player-specific cards, and enhances the GM abilities with additional cards and the ability to pull some from the discarded deck. After playing through all nine games, we came to the conclusion that, besides being really fun, this is best played with more people than just two or three. It can be a real challenge for players as the game gives a lot of power to the GM, which is kept in balance by a greater number of Goonies players. Besides, aren't adventures best when they are shared?

The game serves to immerse players in a world of their own. The story intros, chapter endings, and in-betweens create a strong narrative that makes you feel like you are in your own adventure continuing the world beyond the film. Fans will immediately recognize familiar locations and characters and appreciate the game elements that take you back to that classic film. The true "rich stuff" here is the experience this adventure game creates.