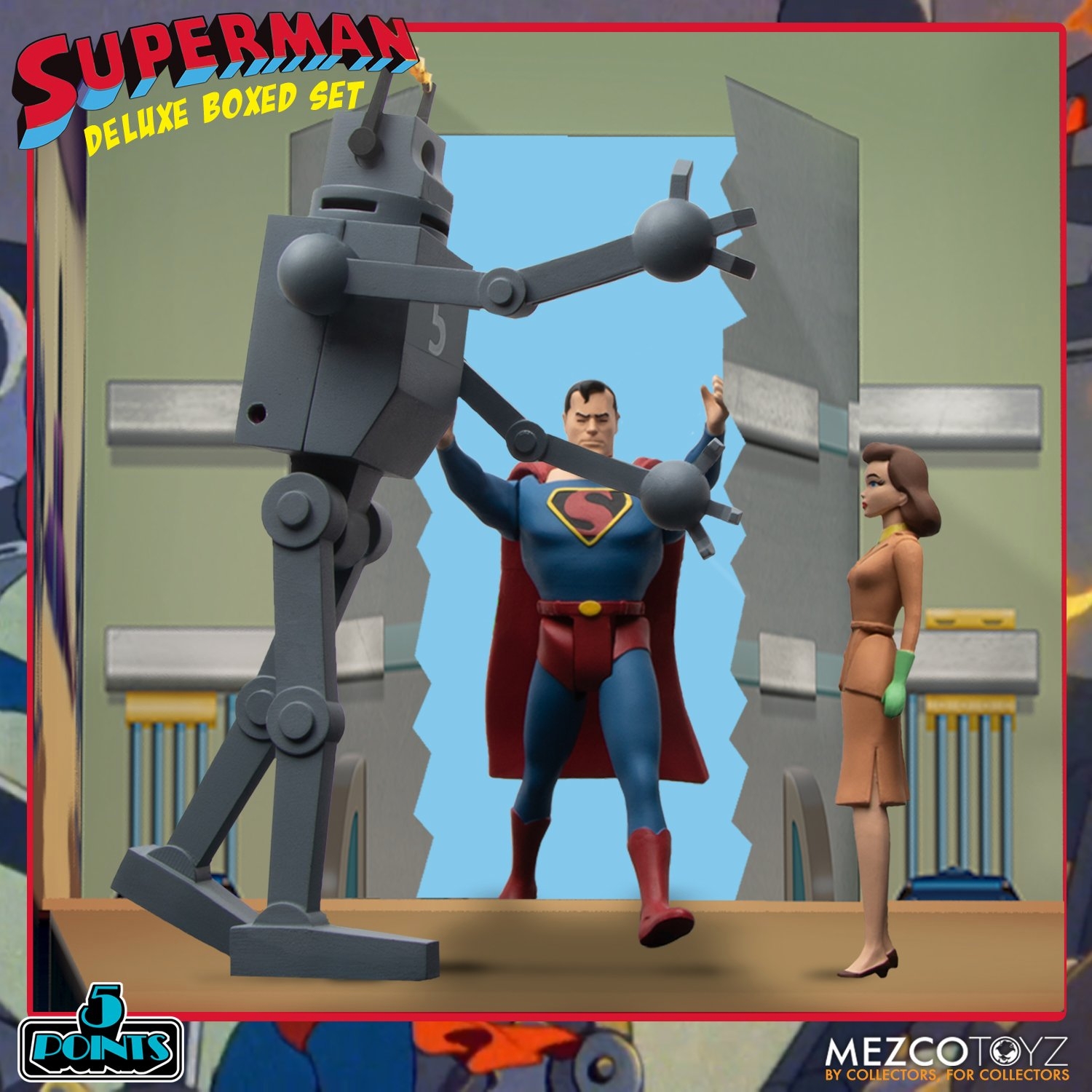 Hows this for a story, Miss Lane? Clark Kent goes into the phone booth and Superman comes out thanks to the quick-change feature!

Once assembled, the retro play set diorama creates the well-guarded House of Jewels storefront on one side, and a two-story diorama of The Mad Scientists lab on the reverse side. The lab comes complete with a drawbridge door that opens and rows of Mechanical Monsters with a secret volcanic cavern below where the monsters are forged.

THE 5 POINTS SUPERMAN  THE MECHANICAL MONSTERS (1941): DELUXE BOXED SET INCLUDES:
Superman  Strange visitor from another planet with powers far beyond those of mortal men. Superman comes with two pairs of interchangeable arms for dynamic posing and a soft molded cape.
Clark Kent  Supermans alter ego, Clark, conceals his heroic identity as a mild-mannered reporter for The Daily Planet. Clark comes with a holdable
Lois Lane  A tenacious investigative reporter at the Daily Planet. Strong, assertive, and able to handle herself in dangerous situations, Lois comes with a small notebook accessory to document her next big scoop.
Mechanical Monster Number 5  A small army of evil robots created by The Mad Scientist to steal money and jewels, the Mechanical Monsters were unstoppable perpetrators of crime. This oversized machine of mayhem comes with two pairs of interchangeable arms for dynamic posing, an interchange propeller that attaches to the neck, a hinged compartment on the back of its body, and removable flame FX that attach to its eyes.


5 Points are Mezcos upgrade to the articulated action figures of yesteryear. These highly detailed, poseable action figures feature some of pop cultures most familiar faces, both old and new.

5 Points Superman - The Mechanical Monsters (1941): Deluxe Boxed Set is packaged in a collector-friendly box, designed with collectors in mind.

The Superman - The Mechanical Monsters (1941): Deluxe Boxed Set is available for preorder at https://mezcotoyz.com/5-points-superman-deluxe-boxed-set.