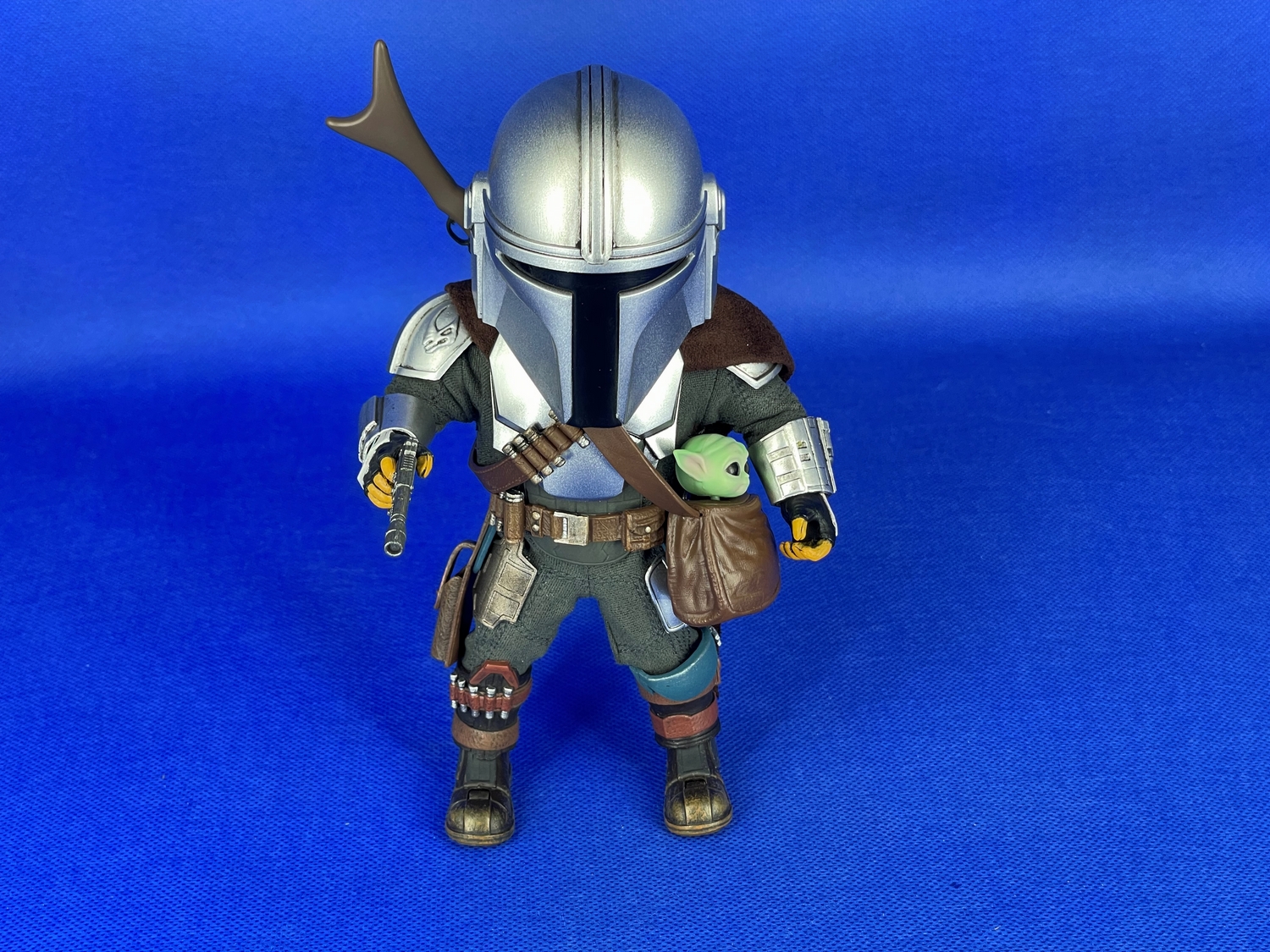 Beast Kingdom takes us beyond the films with the addition of this Mandalorian figure. We got two versions of Mando, one with a Grogu accessory and one with a Grogu figure, sort of a standard and deluxe version. Both the Mando figures themselves are exactly the same though and include the same base accessories. Beast Kingdom decided to go with his upgraded Beskar armor look, which makes sense given him spending most of the time into the two seasons and beyond in this version of his suit. 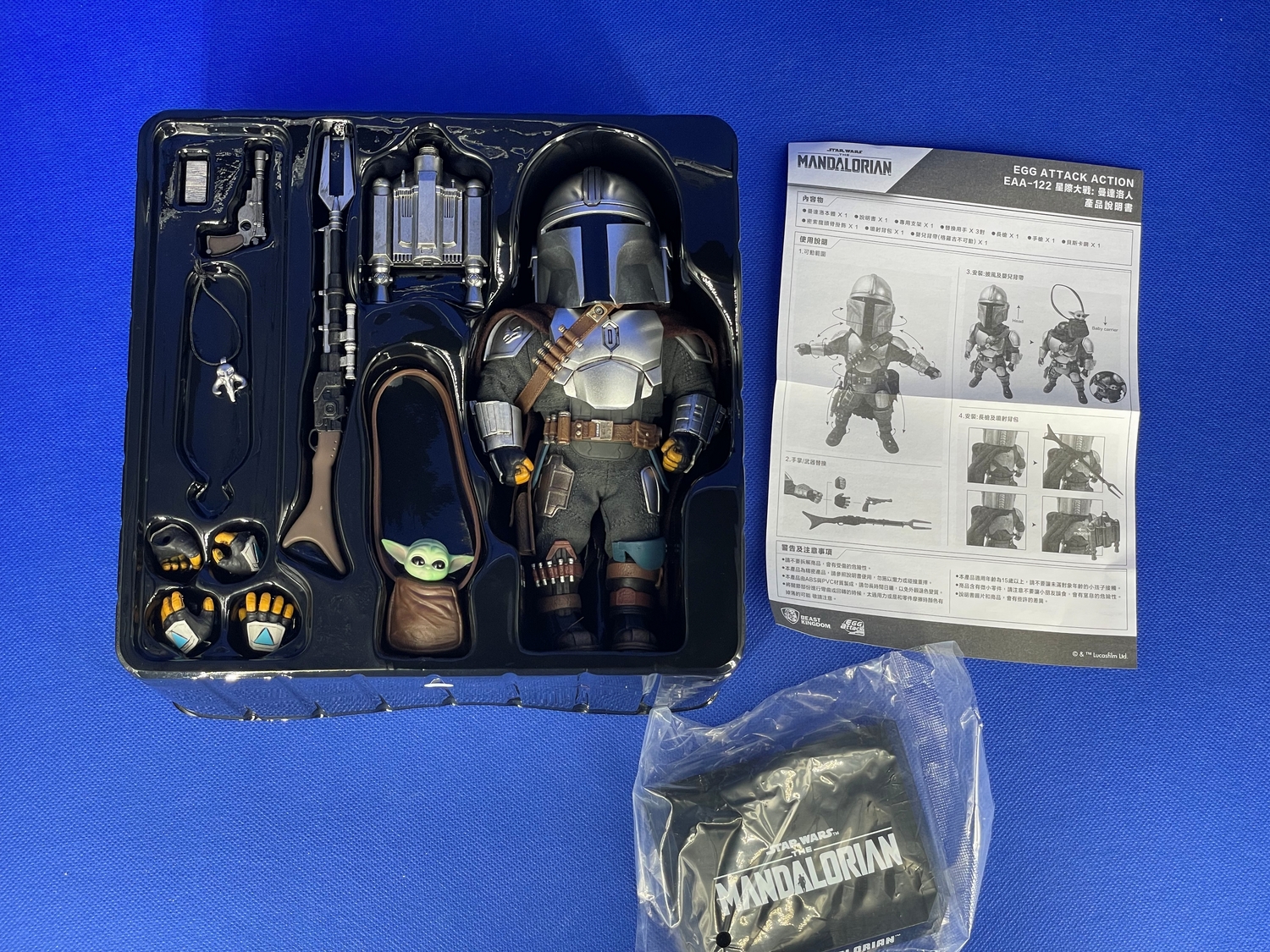 Mando comes with everything an aspiring bounty hunter needs. You get his amban rifle, his blaster pistol, Beskar steel bar, Mythosaur necklace, jetpack, Grogu carrier, and extra hands. The hands are designed to hold the weapons perfectly with fingers inside the trigger guard. As with most Beast Kingdom figures, the hands can be a bit of a challenge to swap out. What makes this figure more challenging is the gauntlets, which give you less space to swap the hands. Putting on the child carrier satchel requires you to remove the head entirely, which fortunately is easy to snap on and off. The hands also let you perfectly hold the Beskar bar, which has a nice Imperial stamp on it. The Grogu in a bag is nice, making for the ultimate dad accessory. This piece is unique to this figure and not included in the deluxe version, so if you want it you have to get both. Other than the head turning, there is not much more to the Grogu accessory, it is still a welcome addition to the set though. 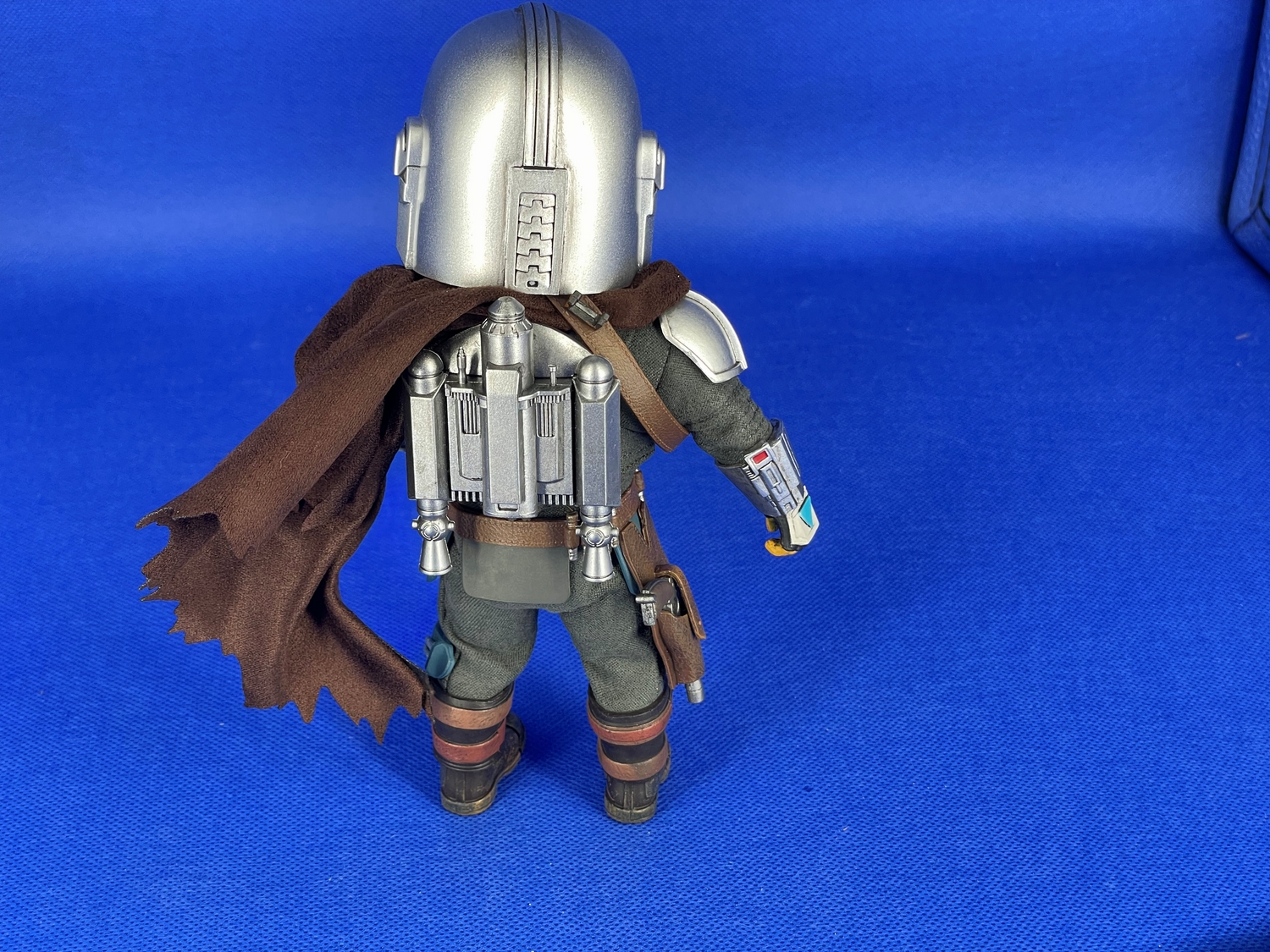 The detail here is amazing. Mando's base is an all cloth under suit with the armor plates on top, just like his real suit. The cape has a wire in it to allow you to give it a wind blown look or just position however you'd like. The armor itself really pops with all the intricately painted accents on the gauntlets, bandolier, and plating. As with all Beast Kingdom figures there is always some fun touch and in this case it's the magnetic jetpack that easily pops on and off. You can also mount the amman rifle on his back for a nice traveling pose. The ramhorn signet on the arm is a nice touch and accurate to the character's design. 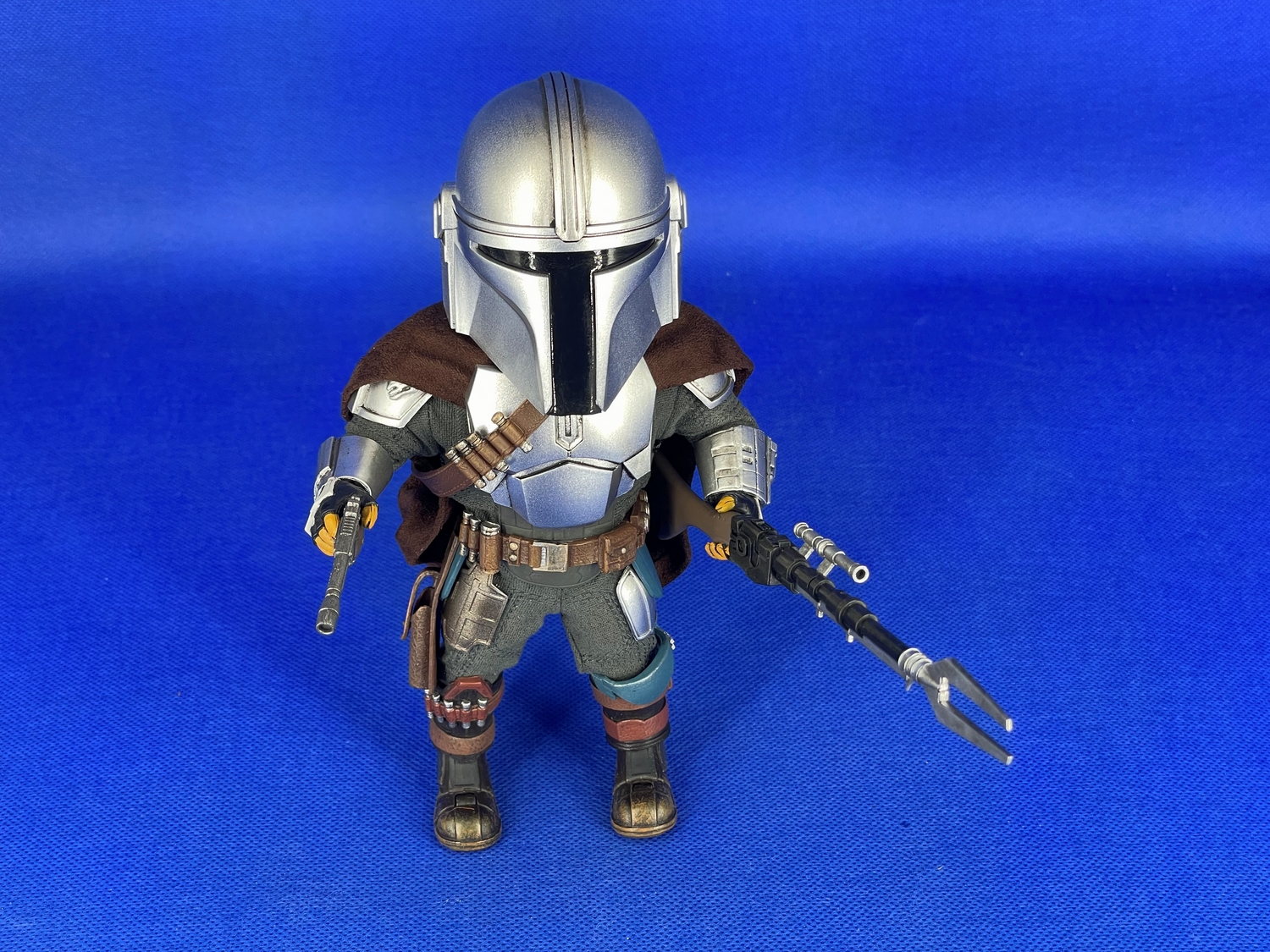 The pose-ability is strong with this one. It's tough to get a good looking down the barrel pose but Mando can easily hold one or both his weapons in a variety of poses. The addition of the stand and the jetpack affords you some flight poses as well, a welcome option. There are multiple joints in the feet as well, which allows this figure to stand on his own on a variety of terrain. The pistol was a little tricky to get into the holster and definitely requires some maneuvering. Probably would have been better to have a cloth and wire strap vice plastic. 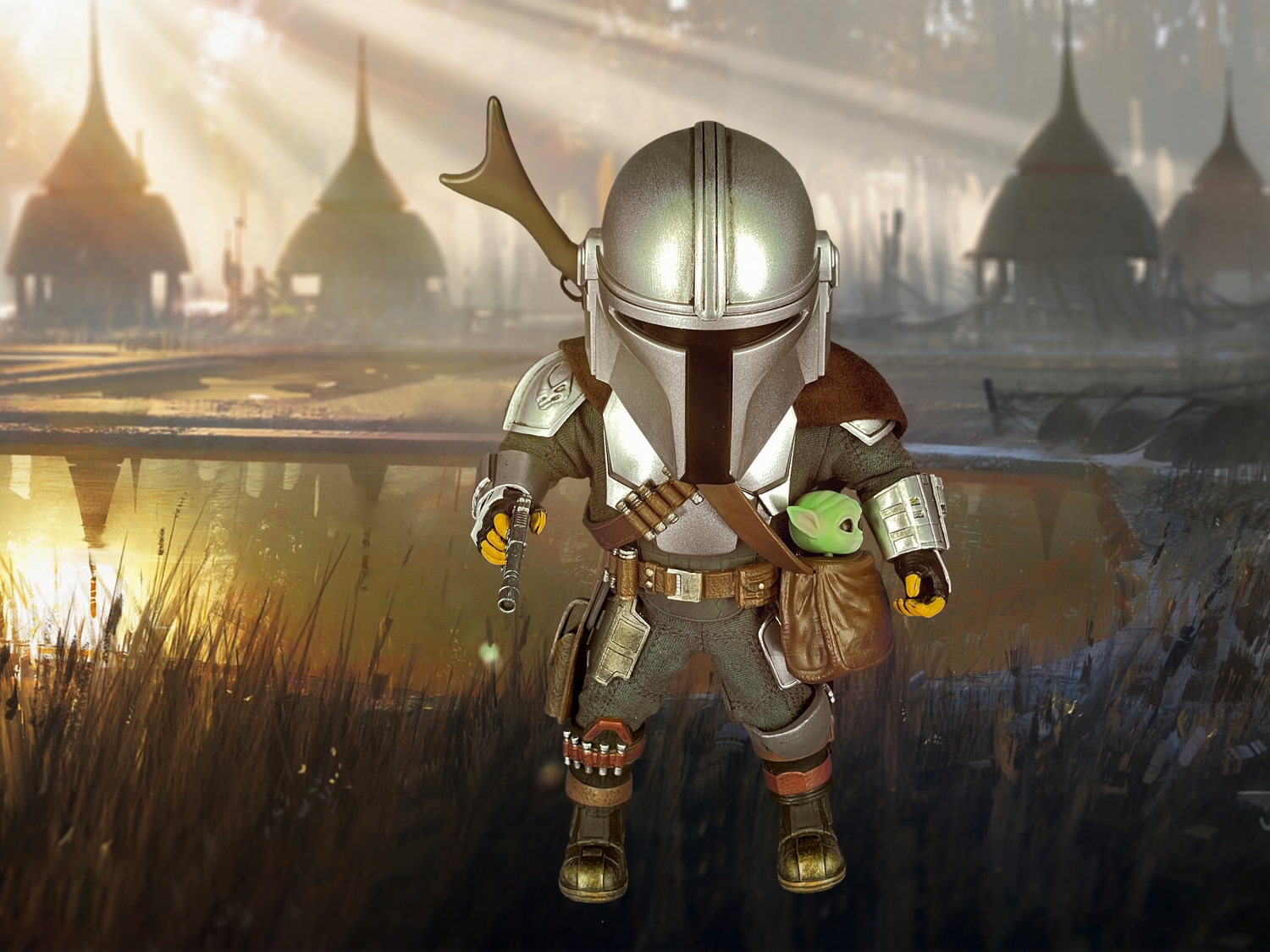 Another impressive addition to the line showing that Beast Kingdom came back strong with the Star Wars figures. The amount of detail in the design and use of mixed media really make this figure stand out even over previous figures in the line. Fans of the show and Star Wars in general will definitely love adding this guy to their collection. If you want to grab one you can grab one from BigBadToyStore and Amazon. Next up we'll examine the deluxe version which comes with many more accessories and a second figure.