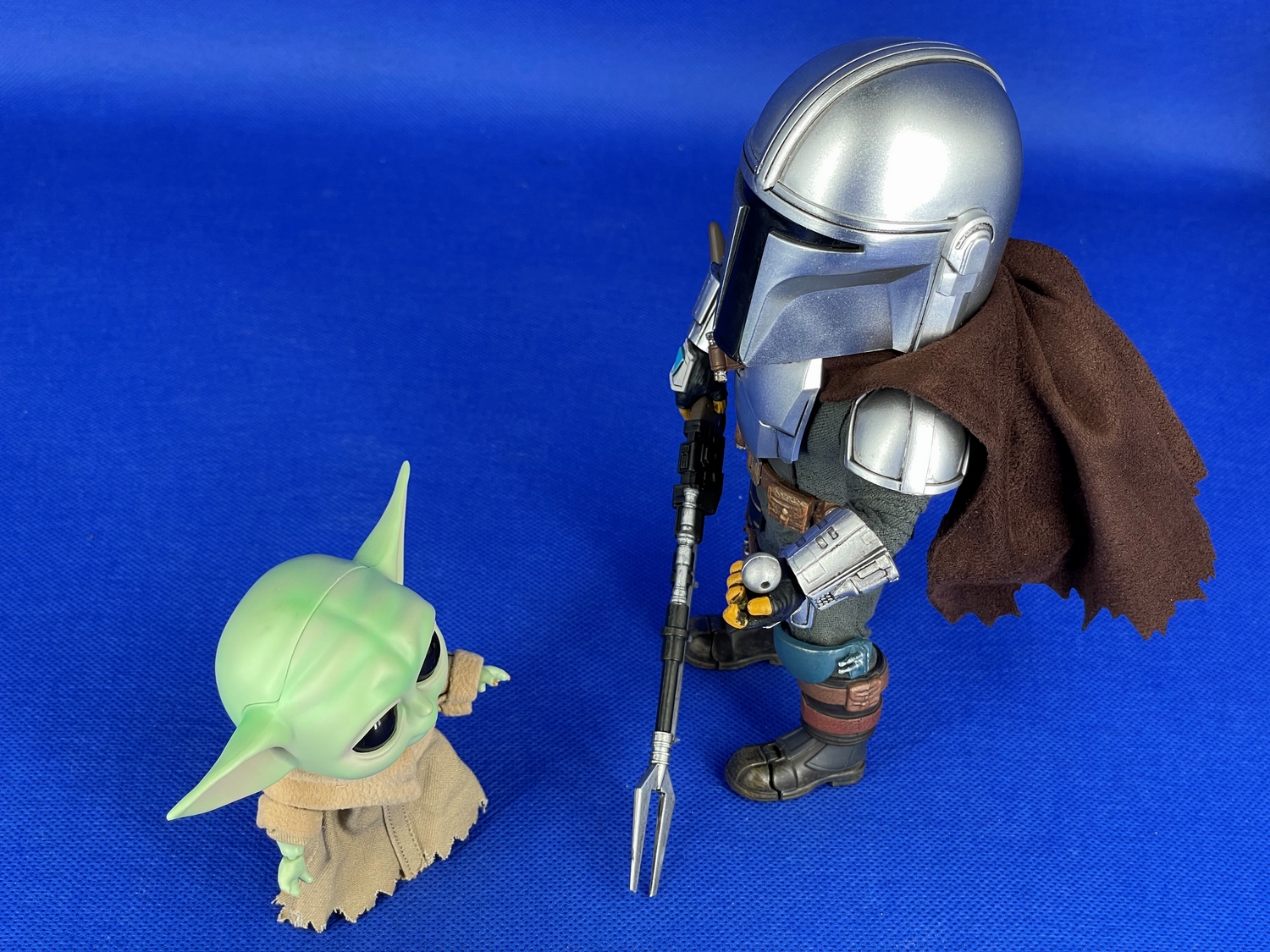 It's been a while since we have seen another deluxe figure in the Egg Attack Action Star Wars line. The last one being the Dewback and Sandtrooper two-pack (EAA-014S). While there were not additional accessories, it was at least two figures that you could purchase separately. In this instance, you can only get the Grogu figure in this two pack, at least for now it has not been announced as a separate purchase. This version contains all of the accessories from the standard release with the exception of the Grogu in carrier, but you get a full-size Grogu figure this time. 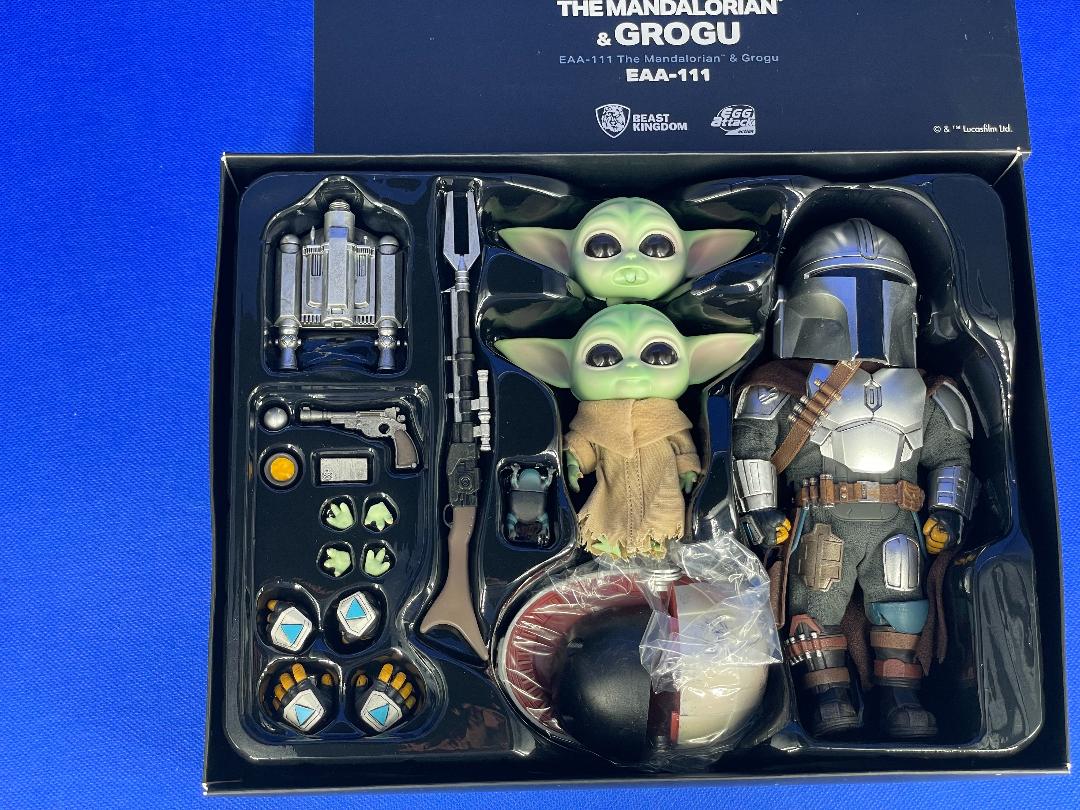 Mando deluxe version comes with everything included in the standard version including his amban rifle, blaster pistol, Beskar steel bar, Mythosaur necklace, jetpack, and extra hands. The hands are designed to hold the weapons perfectly with fingers inside the trigger guard. As with most Beast Kingdom figures, the hands can be a bit of a challenge to swap out. What makes this figure more challenging is the gauntlets, which give you less space to swap the hands. The hands also let you perfectly hold the Beskar bar, which has a nice Imperial stamp on it. With some patience you can hold the shift knob, but it likes to roll out. 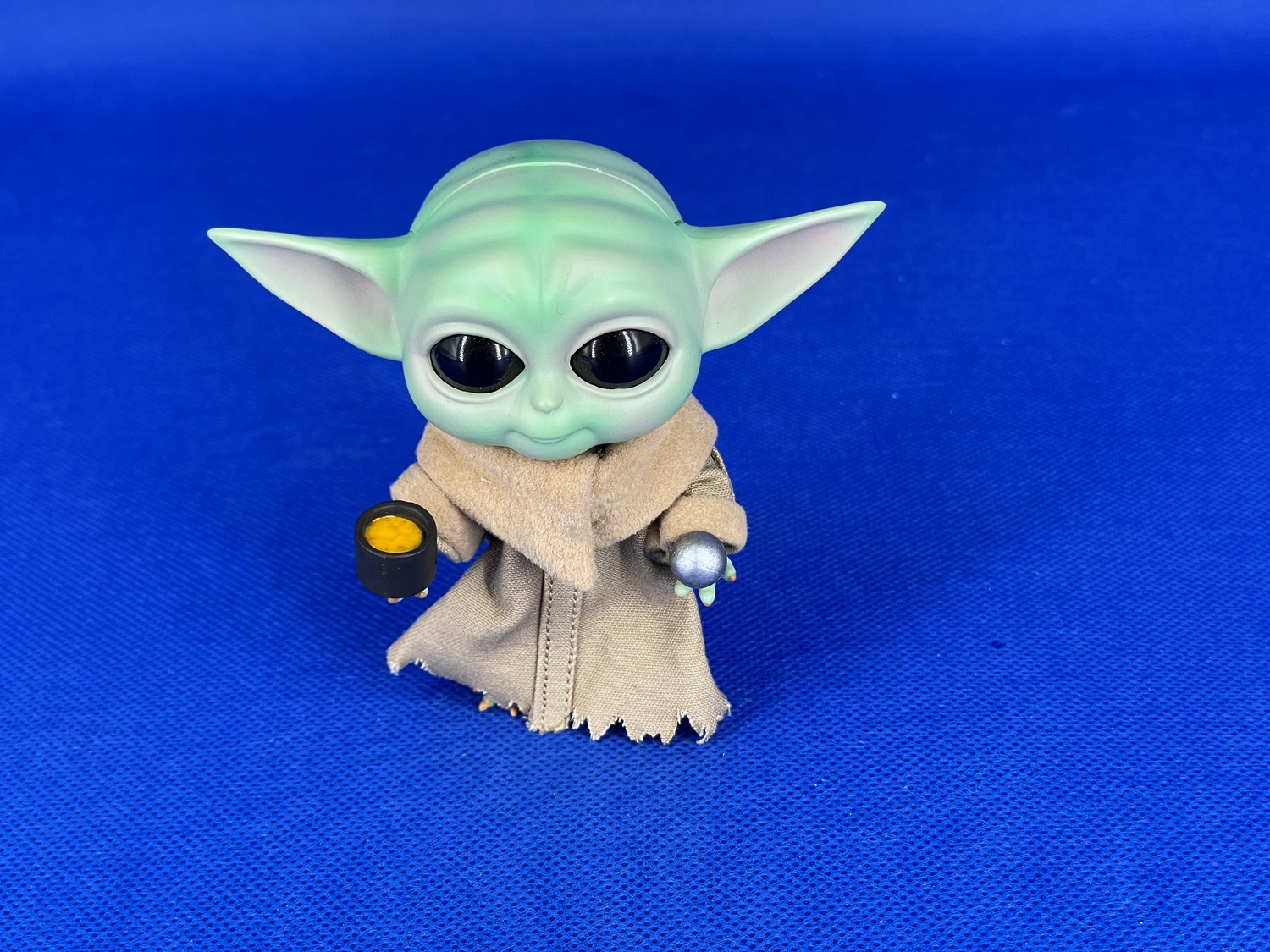 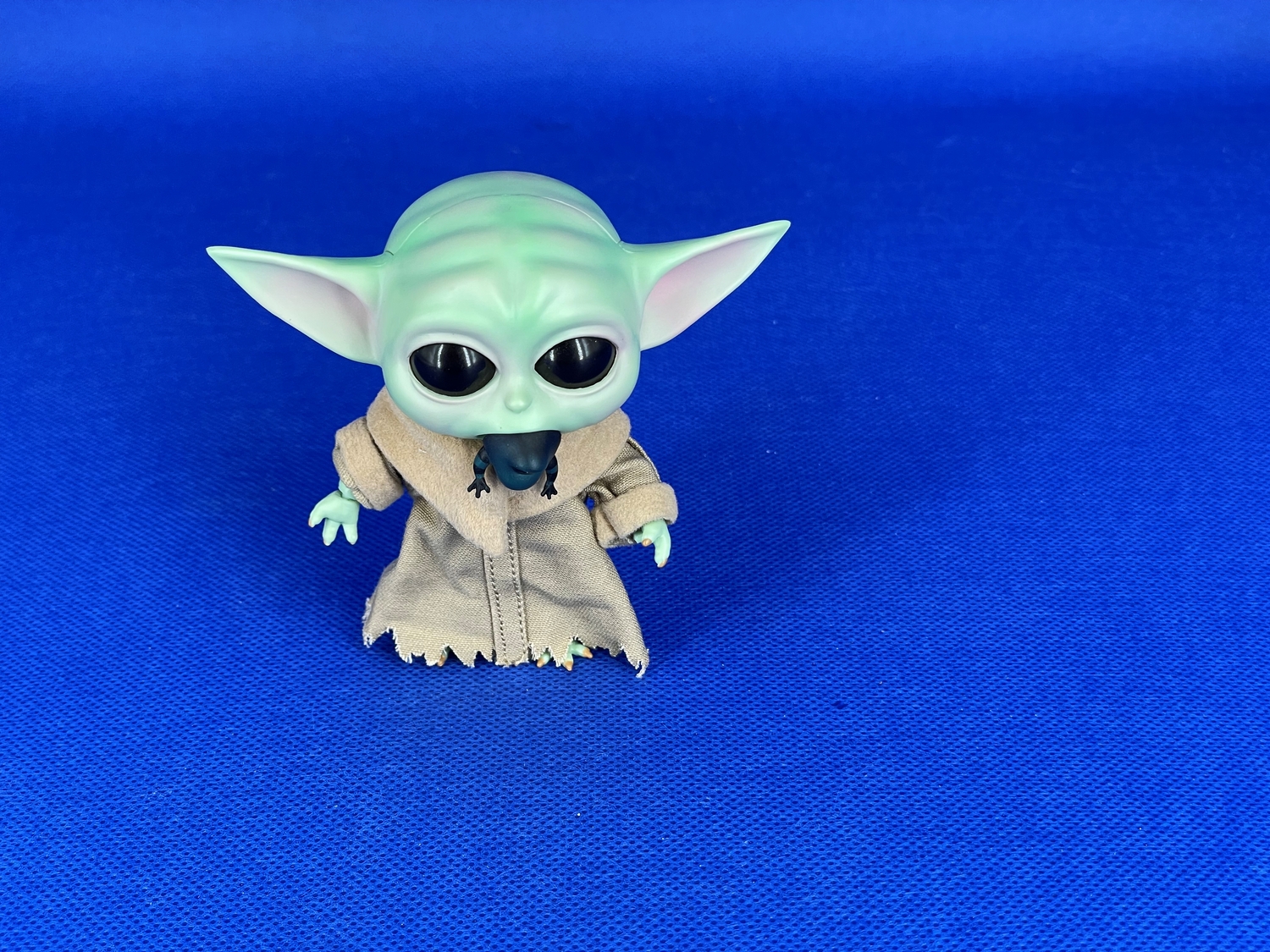 The detail here is just as amazing as the standard release. Mando's base is an all cloth undersuit with the armor plates on top, just like his real suit. The cape has a wire in it to allow you to give it a wind blown look or just position however you'd like. The armor itself really pops with all the intricately painted accents on the gauntlets, bandolier, and plating. As with all Beast Kingdom figures there is always some fun touch and in this case it's the magnetic jetpack that easily pops on and off. You can also mount the amban rifle on his back for a nice traveling pose. The ram horn signet on the arm is a nice touch and accurate to the character's design. Gorgu also has an all-cloth outfit with those adorable black eyes popping out. It's also great that they included an alternate head to allow you to recreate the frog-eating moment. 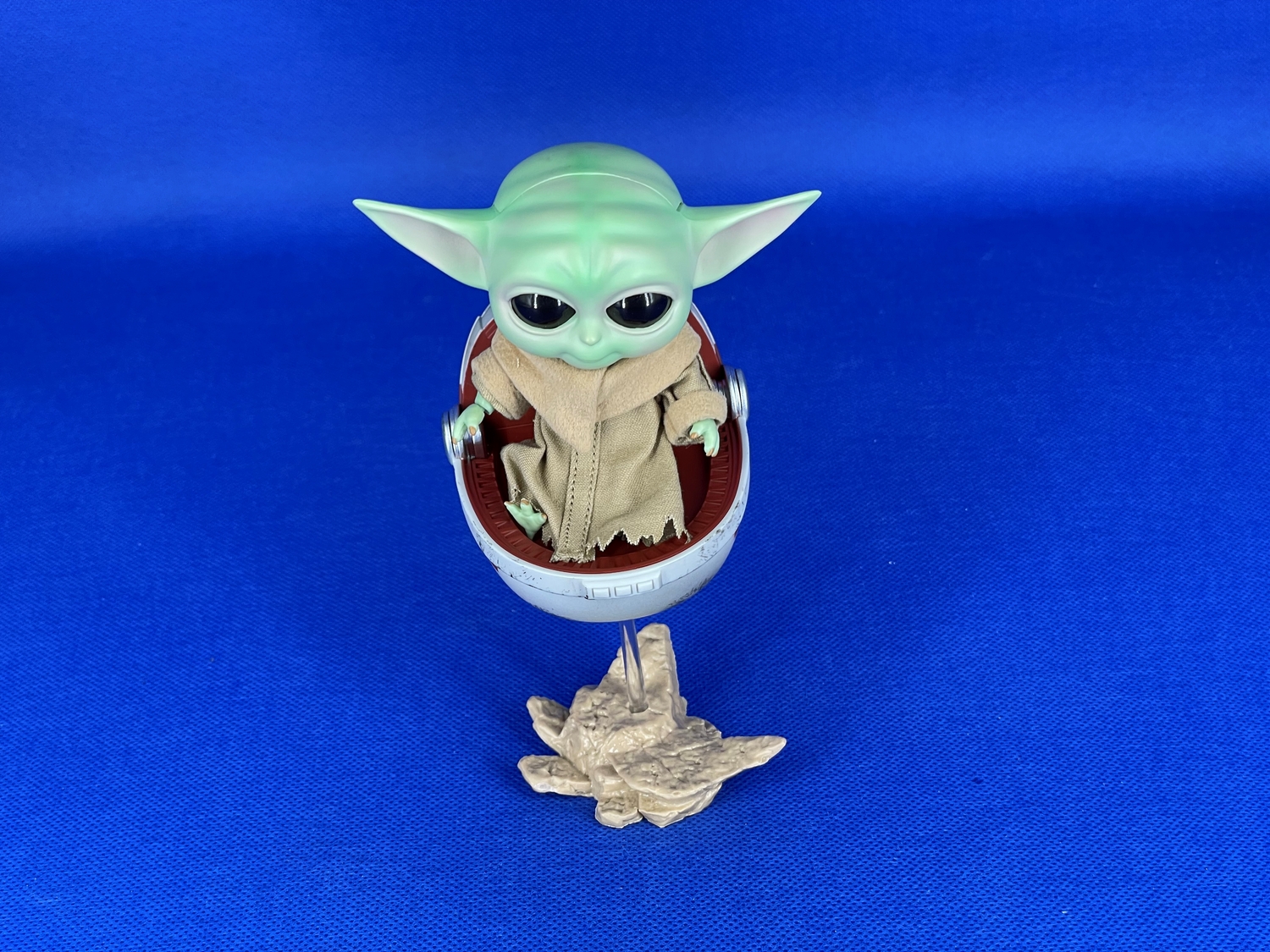 We had the same problems with the standard version regarding posing. It's tough to get a good looking down the barrel pose but Mando can easily hold one or both his weapons in a variety of poses. The addition of the stand and the jetpack affords you some flight poses as well, a welcome option. There are multiple joints in the feet as well, which allows this figure to stand on his own on a variety of terrain. The pistol was a little tricky to get into the holster and definitely requires some maneuvering. Probably would have been better to have a cloth and wire strap vice plastic.

Gorgu's hands afford him some force using or accessory sing poses. However, his arms cannot reach around far enough in front of him to allow him to hold the soup bowl in two hands. At least Beast Kingdom included a special hand with a peg to hold the little know, as it took as many tries to keep it in Mando's hand. The hover pram is a great addition, however, it is extremely difficult to get it to balance with Grogu on it or even off it. There is some kind of counter weight that is included in the set but we found it only makes it harder to balance when you add it. There are no instructions for Grogu in our sample, only Mando instructions which mimic the standard release. This could have been a packaging oversight, but the inclusion of the instructions would have made a big difference here. 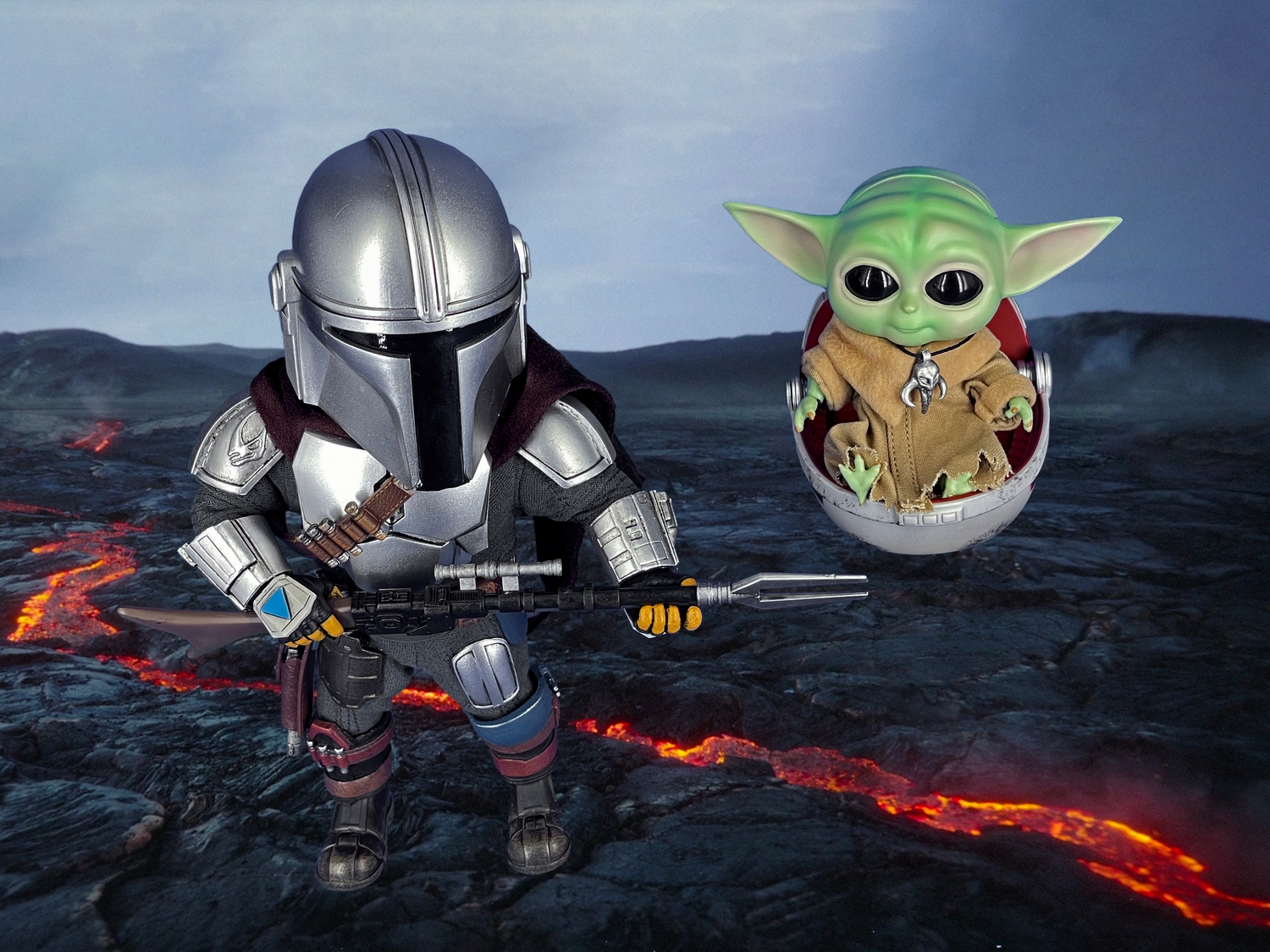 Posing limitations aside, this is a great addition to the line. A significant enhancement over the standard release with the addition of the Grogu figure makes this clearly worth the extra money. If we had to pick one between the two, this is the one to get, especially for the excellent Grogu figure. If you want to grab one you can order from BigBadToyStore and Amazon. Next up we'll examine the deluxe version of Boba Fett in his ROTJ release.