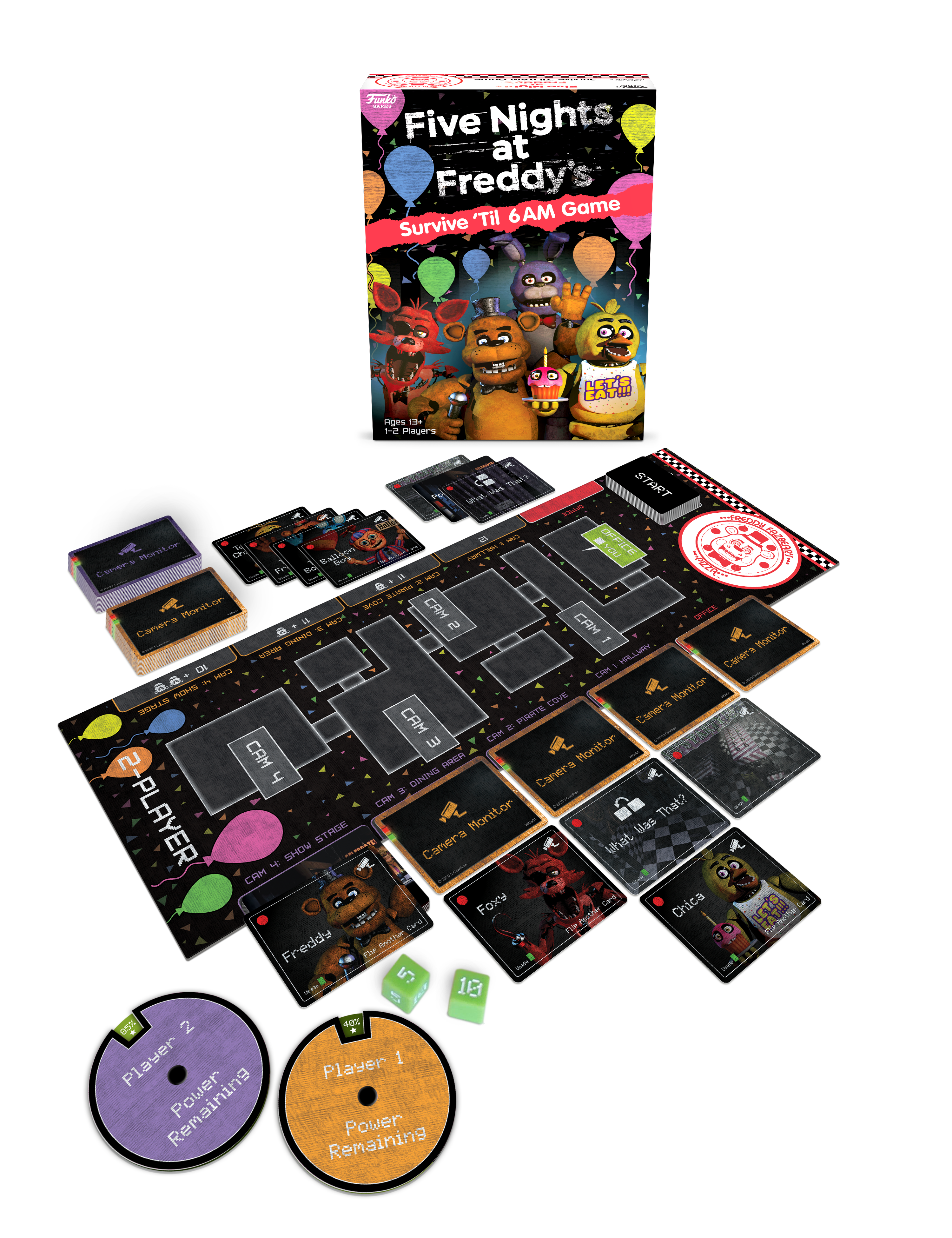 We continued to be impressed by Funko Games' ability to capture the essence of the medium they are turning into a board game. Five Nights at Freddy's: Survive 'Til 6am plays just like the video game it is based on with all the creepiness and surprises you would expect. Let's take a look at the game play elements and mechanics. Again, not missing an opportunity to do a little world building, the instruction sheet mimics a menu from the iconic Freddy Faber's Pizzeria. The game board, which allows for one or two-player play mimics the schematic layout from the security control panel in the game. Each player also gets their own power tracker that serves a similar function to help managing power resources in the game. The simplicity of the game is also captured in the limited number of pieces, which makes this manageable, portable, and easy to learn. What would a FNAF game be without the creepy characters? This game has plenty, featuring animatronics from FNAF and FNAF 2. Featuring regular and toy versions of Bonnie, Chica, and Freddy along with Foxy and Balloon Boy, you'll have plenty of characters to give you jump scares throughout the game. The locations mimic the spots from the pizzeria including the Security Office, the Hallway, the Dining Area, the Show Stage, and the Pirate Cove. There is even a space for the clock, which players of both the video and board games find comfort in as it counts toward the next morning. Setup is really simple, and the same for one or two-player modes. Each player get a power tracker set to 100 percent. The clock cards are ordered to move the game toward 6am every round and a set number of player cards mixed with the animatronics. The included dice help the players determine the power cost of actions.

The game is easy to learn and round based, not requiring any rolls or movement. At the start of each round the clock advances, and cards are drawn for each location, left to right. The player must decide which ones to resolve but can only resolve up to two cards per round, forcing players to make decisions that mix strategy and some of calculated risks. Not acting allows or risks animatronics to move closer to the security office. Players roll the dice to remove these threats but it costs them power resources, which are limited. The game is over when the time reaches 6am or when the animatronics reach the office, just like the video game. Two-player mode doesn't change this, just makes it a more competitive challenge to survive with the best management of resources. Funko Games has done a great job of capturing the atmosphere and gameplay of the FNAF series. Fans of the series will definitely get a familiar feel when playing this game and newcomers will find a fun challenge with solid replay value when looking for a mobile game to take on a summer vacation or for those rainy days indoors. One last note, we recommend pairing with pizza of course!